This year has been a year full of  page-turners, tear-jerkers, and belly-laugh inducing reads. If you’ve worked your way through the best books of 2015 and are looking for something to read the next time you’re on a plane or sitting on a beach, check out the 16 best books of 2016 (according to me).

Note: Two of the books I read this year involved a woman who was diagnosed with inflammatory breast cancer.  This type of cancer presents as a rash, localized heat, puckered skin or discoloration rather than as a lump. It’s very aggressive and affects women at a younger age than typical breast cancer. I’d never heard of that, and since it only accounts for 1% of breast cancer cases, it’s possible that you haven’t either. So… I just thought I’d take a second to encourage you to get anything out of the ordinary checked out.

I’m a believer in Prince Charming, pumpkin carriages and the truth that a shoe can change your life, which is why this love story fairytale was just up my alley. Apparently, this book was one of Crusie’s first, and the reader’s note in the front said it was everybody-in-New-York-and-Toronto-turned-it-down bad. Thankfully, Min and Cal got a second chance at love when Crusie decided to turn this failed romance novel into a fairytale. Throw in a hot beast (or maybe a prince in disguise), a box or two of Krispy Kreme, a bet and a woman scorned, and we have ourselves a winner!

Have I mentioned lately that I love Kate Morton? Because I do. The Distant Hours is a multiple time period piece that floats between WWII and present day. Morton tells the story of three sisters, children of the author of the famous “The True History of the Mud Man,” and Meredith, the girl who came to stay with them at Milderhurst Castle during the war. In present times, we meet Edie, Meredith’s daughter, who wants to know why her mother has never mentioned her time at Milderhurst Castle. Morton delves into the intricacies of familial relationships– how far we go to protect one another from outsiders and ourselves.

I’d recommend not reading this book in public unless you’re extremely comfortable sobbing in front of people. This story follows Tully and Kate through over 30 years of friendship and Kristin Hannah paints one of the most beautiful, close sister-friend relationships. Tully grew up with a mom who is as flighty as her nickname, Cloud. Kate comes from a close-knit, protective family and feels she just doesn’t fit in at school. They find each other and in their friendship, find a place to belong. The years see ups and downs, support and betrayal, and just how far the promise of best friends forever, no matter what, will go.

In Emily Giffin’s newest book, we are introduced to Josie and Meredith, two sisters whose lives are irrevocably changed when their older brother, Daniel, is killed in a car accident. That tragedy shifts the course of their lives. Years later, they deal with the aftermath of the crash and the choices they made because of it. Josie is the flighty, impulsive little sister who’s eternally single, but wanting more. Meredith is the responsible, older sister who has the perfect marriage with Daniel’s best friend. As the sisters face the past, they realize that the walls between them need to come down so they can move forward.

The Girl Without a Name

This book is like one of my favorite crime shows, but even better. Where tv shows have to wrap up an entire storyline in 42 minutes, this book can really unpack the storyline, which is great because it’s a good one! An African American girl is found wandering the streets of Buffalo in a catatonic state and brought to the hospital by police. She can’t remember who she is and it appears that no one is looking for her. Medicine isn’t working and it seems all hope is lost. Enter Dr. Zoe Goldman, a psychiatrist who is determined to get to the bottom of things. She discovers Jane Doe’s true identity and finds out this case hits close to home.

A bachelor party goes horribly wrong. Best man, Richard is an upstanding citizen, a good husband and father. Thanks to his little brother’s crazy friends, though, he ends up with prostitutues in his nice, suburban home. And then the prostitutes kill their handlers. The situation spirals out of control as Chris weaves a story that leaves you wondering about ‘good people’ and ‘bad people’ and the life circumstances that lead a person to become perceived as either.

Is Everyone Hanging Out Without Me?

I want to be best friends with Mindy Kaling. Is Everyone Hanging Out Without Me? is a stream-of-consciousness book about everything from growing up to getting a first job to love. I tore through this book in about a day, and I’m pretty sure I made major strides toward my 6-pack from all the laughter.

I love this book! Can you believe Kate Morton did it again? If you’ve been reading my favorites, you’ll know that I can! Vacillating between the early 1900s and today, we meet a family rocked by the kidnapping (murder?) of a baby boy during the family’s yearly Midsummer party. Each of the family members feels guilty… But who is responsible? Now, Detective Sadie Sparrow, on leave for getting too involved in a case at her precinct, becomes determined to find out. Morton keeps you guessing until the end and leaves you with tears in your eyes and a profound respect for her ability to tie up loose ends.

This is a story of strength, survival, resilience and justice. Martha Hall Kelly offers a new perspective on WWII in this novel told from a female perspective. She introduces us to three strong women from vastly different backgrounds. In this book, we get to know New York socialite Caroline Ferriday, Polish teenager Kasia Kuzmerick, and a young, ambitious German medical student named Herta Oberheuser. We’re transported from across the ocean as find out how each of these women deal with their circumstances as the war comes to their doorstep. Their lives begin to intertwine when Kasia is sent to Ravensbrück, a Nazi concentration camp where Herta has taken a position as a doctor.

I need a Monsieur Perdu in my life. He calls himself the literary apothecary and is able to heals ailments of the heart with prescriptions for books from his floating bookshop on the Seine. The only one he can’t heal is himself. Left by his one great love, he is about to open a letter from her that changes the last 20 years of his life. Can Monsieur Perdu regain what he’s lost?

On my epic New Zealand road trip (you know.. The one where I explored an entire country in 2 weeks?) we did a LOT of driving. Kristin Hannah kept us company as we listened to her newest book, The Nightingale. Set during WWII, Hannah blurs the lines between good and bad, right and wrong as she tells the story of a French family’s survival through the war. We meet enemies that might be friends in other circumstances and learn of the horrors of war as women are forced to make unimaginable sacrifices for the sake of their family. I love that this book highlights women’s role in the war, because just as the courageous men fought at the front, equally courageous women fought at home. More than once, this book made me cry at the unfairness of war and the power of love.

This book is one of my favorites of the year. It’s set in Texas, revolves around football, and (of course) has a sweet love story tied in, too. Emily Giffin did her research, because she mentions lots of my favorite Dallas restaurants and landmarks. Reading this book transported me to football season in my hometown.

People Who Knew Me

Years ago, I read a secret on the Post Secret website that said “Everyone who knew me before 9/11 believes I’m dead.” That revelation has haunted me over the years. I tried to understand what might cause a person to fake their death and disappear. Kim Hooper wrote the novel that delves into one of those scenarios.

Emily Morris died in the World Trade Center on 9/11, at least that’s what her husband believes.  People Who Knew Me is told from Emily’s perspective as she shares the events that lead to her ‘death’ and rebirth.

One of the downsides of travel is that I read everything on an iPad. I never get to feel the spine of a book crack open for the very first time, and the last time I lived out the phrase ‘nose in a book’ seems like a lifetime ago. And for this book, it means that I was completely unprepared for it to end. I thought I was halfway through, and suddenly, I was face-to-screen with the acknowledgements. It took a moment to regain my balance because the end was so unexpected. But as unprepared as I was for the ending, it was perfect.

Oh man! If you liked Girl on the Train, you’ll love this one. Abi is wracked with guilt over causing her twin sister’s death and is mourning the loss of her better half. When she meets Bea, who looks and acts like the identical twin she lost, life seems to be looking up. But when Abi moves in with Bea and her twin brother, Ben, some weird things start to happen. Letters from Abi’s twin sister, Lucy, go missing and threatening messages are left. Has Abi lost it? Is Bea jealous of Abi’s relationship with Ben? The secrets in this dark and twisty book will keep you turning the page until the very end.

What She Left Behind

This book broke my heart, mended it, and left it overflowing after 325 pages. Ellen Marie Wiseman’s dual era novel is set in New York and follows Clara in the 1920s and Isabelle in 1995. Clara, the daughter of a wealthy family, is wrongfully committed to an insane asylum after a fight with her parents. Izzy’s a high schooler, living with a foster family because her mother is in prison for shooting her father. Their stories collide when Izzy finds Clara’s journal at Willard State Asylum and wrestles with personal demons to find the truth about what happened.

The Year of Living Famously

I’m sure everyone’s dreamed about what it would be like to be famous…but what happens if it actually comes true? Laura Caldwell introduces us to Kyra, a struggling fashion designer who finds out what it is to be truly famous when the man she married makes it big in Hollywood.  Soon, she is being hunted by paparazzi, gossiped about in magazines and becomes the target of a fan obsessed with her husband. Is their love strong enough to withstand Hollywood? 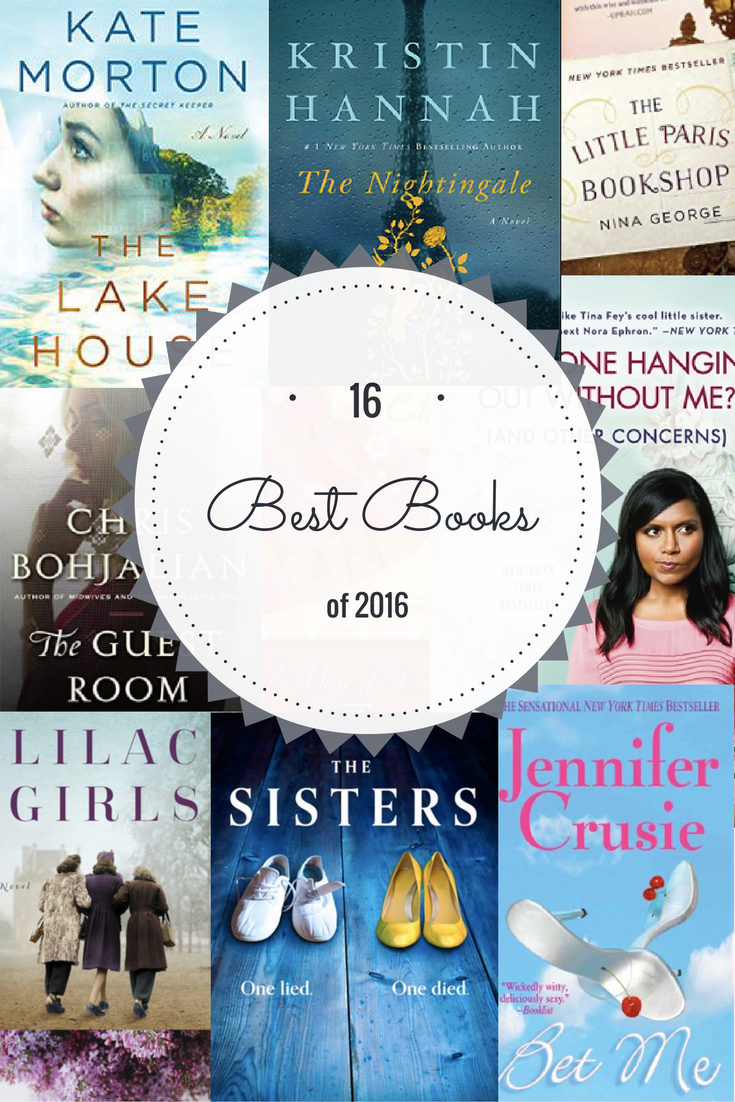 One more note: Some of the links and photos in this article are affiliate links. That means if you click on them and purchase, I’ll receive a portion of the sale, but it doesn’t cost you any extra. If you like reading articles from The Sweet Wanderlust, I’d appreciate you purchasing through these links.