I know lots of Americans visit the nation’s capital in the eighth grade. They visit the museums and monuments, and watch our country’s history come to life. I never had the opportunity. On this trip, I was over the moon to see Abraham Lincoln sitting in his armchair and totally geeked out when Marine One flew right between the Washington Monument and where I stood on the National Mall. I was surprised at the pride I felt as I walked down streets lined with American flags (where I live, you’re more likely to see Texas flags hanging from homes). But visiting monuments works up an appetite! When it came to finding the best places to eat in Washington, DC, I polled my local friends and discovered the must-visits for any first-time visitor to the DMV area (that is, Washington, DC, Virginia, and Maryland) and they didn’t lead me astray!

Founding Farmers takes the idea of farm to table very seriously– so seriously in fact, that the restaurant is majority-owned by over 47,000 American family farmers. When the distance from farm-to-table is this short, you can really taste the difference. Everything in the restaurant is made from scratch… and I mean EVERYTHING! I overheard the family at the table behind mine ask for a Fanta, and the server described their homemade orange soda that sounded refreshing and flavorful. We were almost tempted away from cocktails (made using liquor from their Founding Spirits distillery). Almost.

Drinks and dinner at Founding Farmers

Instead, we tried The Constitution (made with Founding Spirits Dry Gin, chamomile, ginger, blueberry, lemon, and jerk soda) and The Martinez (a gin cocktail with maraschino liqueur, dolin rouge, and absinthe bitters). I think we made the right choice! 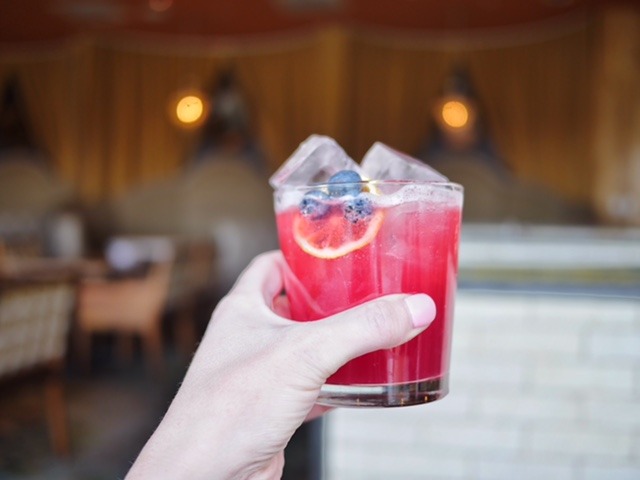 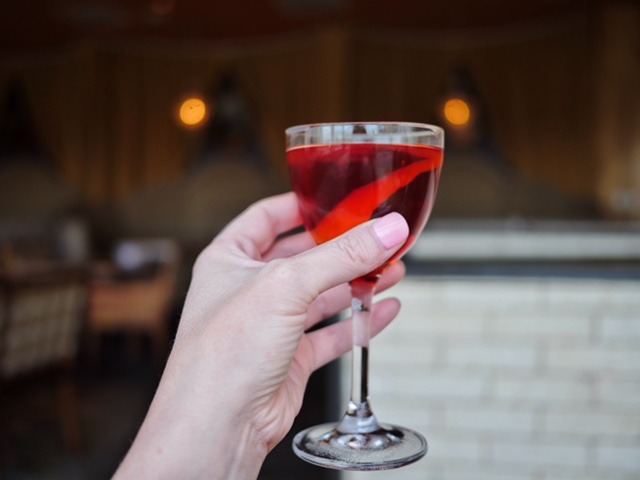 For starters, we went hyper-local with Virginia ham and biscuits. Three types of ham are served with whole grain mustard, cranberry jam, chow-chow relish, and honey butter. From a Southern girl who’s eaten biscuits everywhere from Loveless to the Lone Star State, these are probably the best I’ve ever had. Fresh out of the oven, fluffy-but-substantial biscuits, topped with an almost endless combination of ingredients, this is the appetizer version of a choose-your-own-adventure novel. And this story has a happy ending! 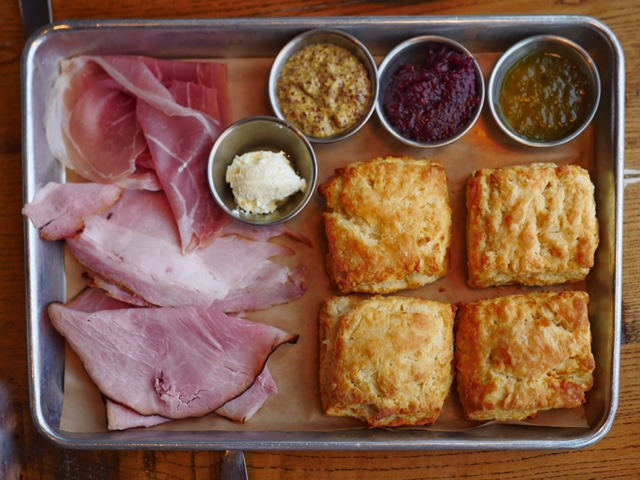 I was so full after the appetizer that I opted for a Jefferson-filled donut for dinner. My friend paid homage to our home state with the Texas chili dog and substituted potato salad as the side. Ever the “I’m not hungry, but can I have a bite of yours?” friend, I stole a forkful of potato salad. The tangy, mayo-less salad was the freshest, most unique I’ve ever had. 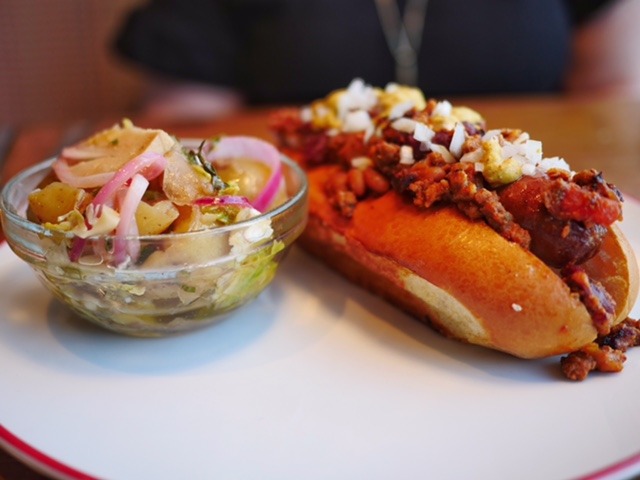 Friends from Canada to Portugal recommended this restaurant as a must-visit, and my local friends agreed– this is famous Washington, DC food you’ve got to try! Support farmers and taste food the way it’s meant to be enjoyed!

Y’all. I have to confess to a travel and food blogger fail. Virtue Food and Grain was one of my first restaurant experiences post-vaccination, and before, eating in a restaurant was a rarity. I got SO excited about the experience and the food that I devoured my entire meal before remembering that I am supposed to take photos of my food to share with you. The marketing team at Virtue Feed & Grain came through with some mouthwateringly gorgeous photos that will have you picking up your phone to make reservations at this restaurant in Old Town Alexandria!

Virtue Feed and Grain is located just around the corner from Captain’s Row, the oldest cobblestone block in the city. Take the long way to the restaurant for a romantic stroll– just watch your ankles on the uneven stones! The restaurant borders the historic Wales Alley, named for Alexandria’s first brewer, Andrew Wales. Virtue Feed & Grain repurposed a feed house from the 1800s, maintaining the charm and preserving original elements wherever possible. 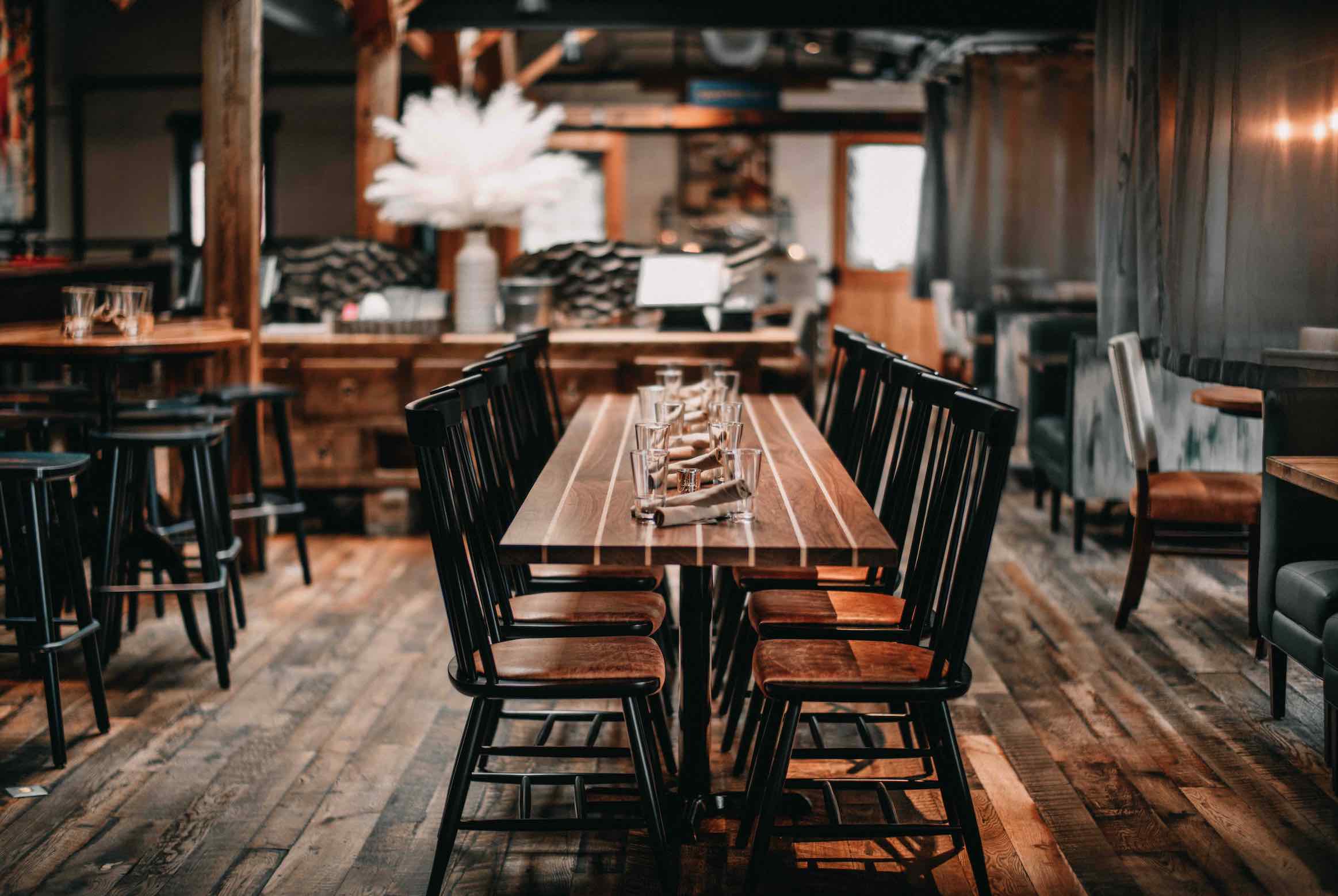 We began our celebratory “I’ve just arrived in the DC-area” meal with a round of cocktails. My Dark Chocolate Manhattan combined Maker’s Mark, Amaro Averna, and chocolate bitters for a potent and perfectly amazing start to a meal that would only get better as we continued to order. 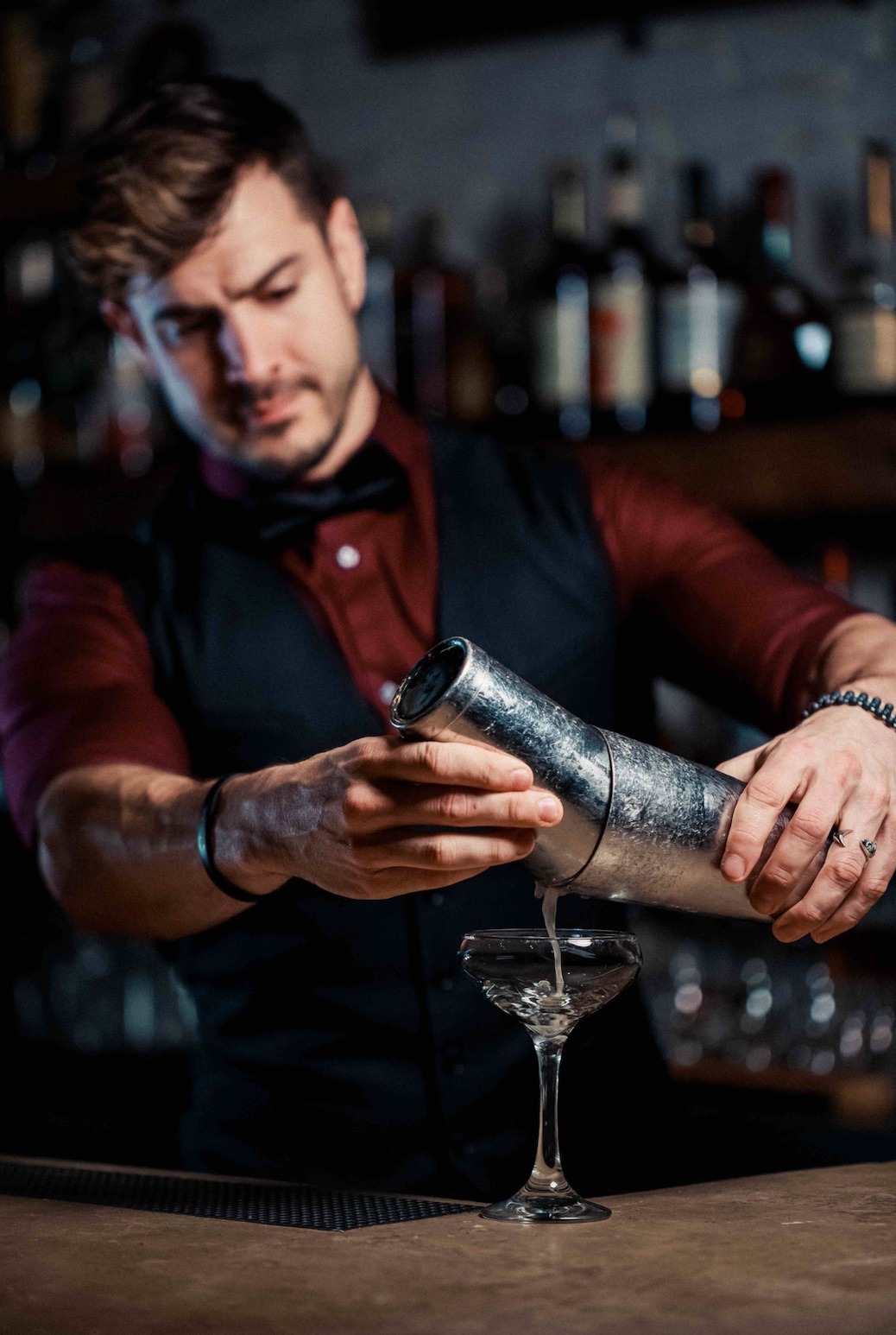 I’m pro-appetizers, preferring to try lots of new things instead of committing to one main course. Their Scotch eggs called out to us (I’d only tried them once– at Jamie Oliver’s favorite spot in London and my friend had never tried them). They did not disappoint!

Long before my plane landed in DC, I’d heard about Virtue Feed & Grain’s crab dip. Y’all. If you’ve never had it, go ahead and book your reservation now. This is the stuff of dreams. You’ll want to bathe in it. But don’t. That’s gross. If I had to pick a winner for the best thing I ate on my trip, this would win.

My friend and I split one main course– short ribs. The melt-in-your-mouth, red wine-braised short ribs with sauteed mushrooms and sunchoke parmesan mashed potatoes were a worthy follow-up after the amazing crab dip! 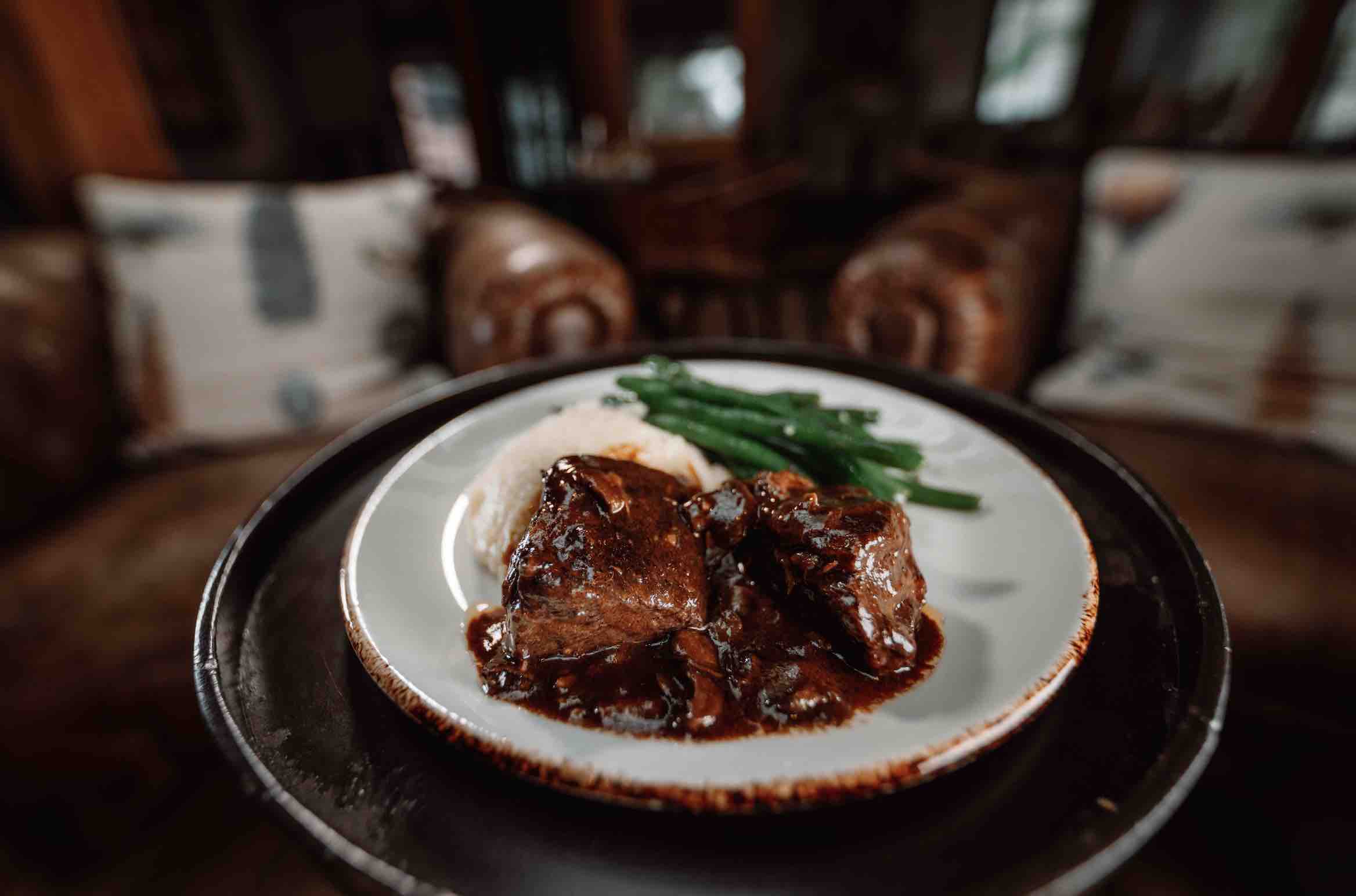 Busboys and Poets is named for American poet Langston Hughes, who worked as a busboy at Wardman Park Hotel in the 1920s before making it big as a jazz poet. While I didn’t make it to the restaurant/ community gathering space/ cultural hub for artists, activists, writers, thinkers and dreamers, it’s top of my list for next time. I asked my friend Bri to share why she thinks this is one of the coolest restaurants in DC:

“Aside from the access to books by my favorite demographic of writers (Black women), Busboys & Poets was where I first got to experience spoken word poetry! They’re one of best places to see/hear new creatives and have good discussion.”

The Ted’s Bulletin website claims that “you will find fast friends in our servers, bartenders, and fellow diners.” No joke, by the time we left, one of the servers called out goodbye to my friend using her name! I visited for the homemade pop tarts, but their brunch was the real show stopper. 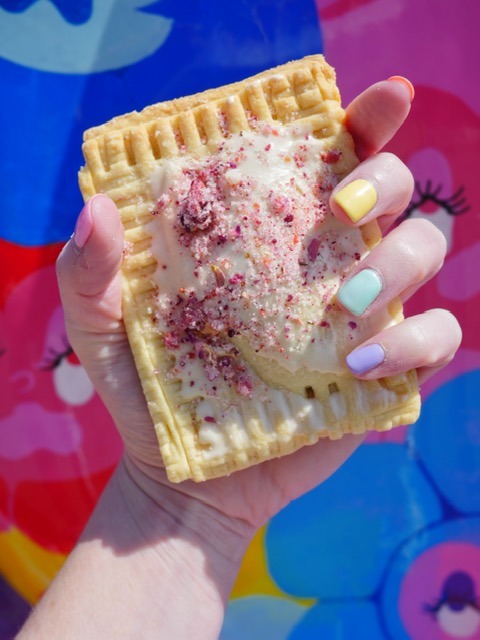 The crab cake benedict with homemade Hollandaise and perfectly crispy hashbrowns was a perfect way to start the day. The Old Bay bloody Mary was pretty dang good, too! The chefs were absolutely on fire– we’d hardly gotten the order in before it arrived on our table! 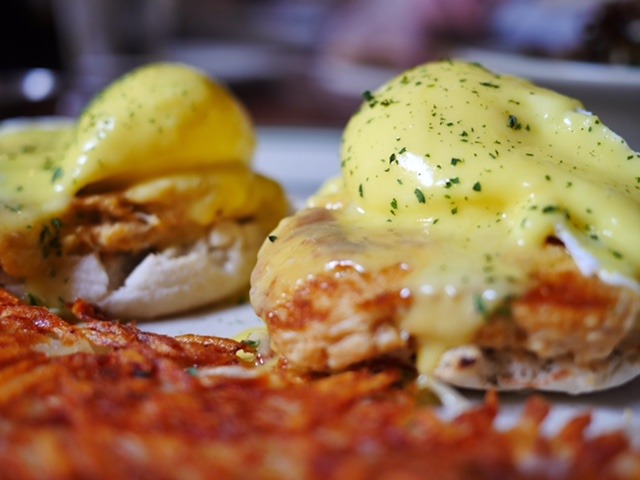 Call Your Mother: A Jew-ish Deli

I’ll admit… Call Your Mother made my list of fun places to eat in DC for two reasons: 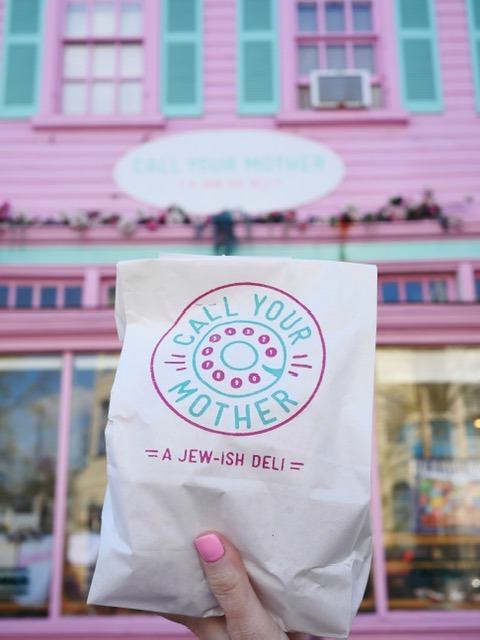 Call Your Mother A Jew-ish Deli

While the Instagrammability + fame of this place caught my attention, the food earned its rightful place on this list. I ordered the Pastrami Sun City– pastrami, a bodega-style egg, spicy honey, and cheese on an everything bagel. It tastes even better than it looks, and I think we can all agree that it looks amazing! 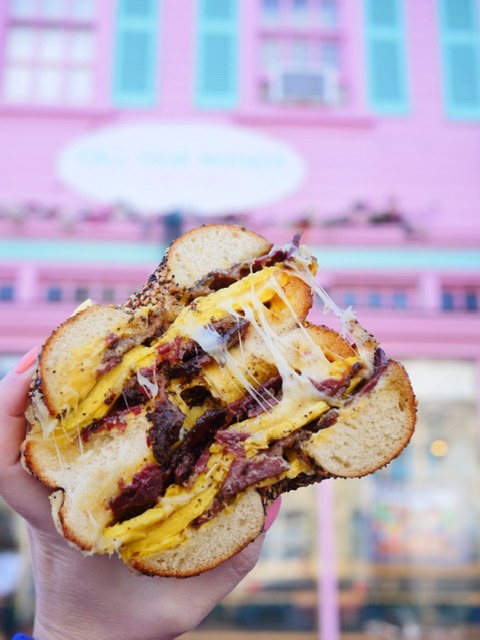 More than just amazing food, Call Your Mother is doing amazing things for the community. They’re committed to providing breakfast to local children, supporting career training, encouraging creativity through summer camps, and transforming the lives of immigrants. That’s an incredible way to do good and eat well!

While you’re in Georgetown, check out this walking food tour!

Forget everything you know about cupcakes… Baked & Wired is serving cakecups! While they may taste sugar-sweet, the brand is a little more metal. Serving flavors like “Unip*rn and Rainho,” “Unporked Elvis,” and “Karen’s Birthday” in a shop with mostly-black walls, Baked & Wired is a far cry from its pastel-hued confectionary competitors.

I tried their seasonal Cherry Blossom cakecup and fell in love after one bite. The vanilla cake has chopped maraschino cherries folded throughout and the maraschino buttercream is just the perfect amount! *If you hate the m-word, skip the next sentence* The cakecup was super moist, perfectly sweet, and huge! A perfect combination in my book! 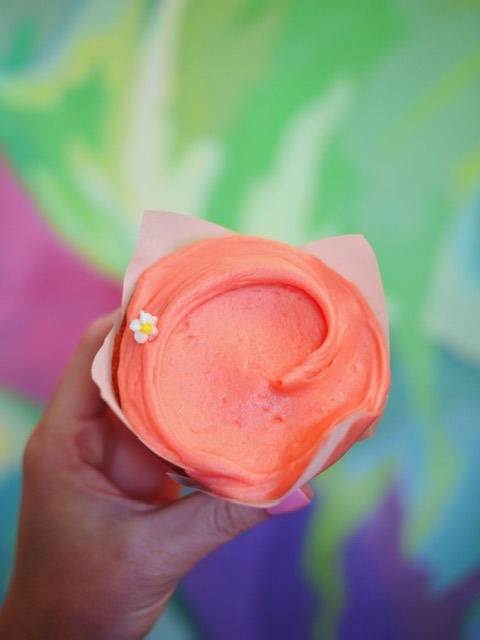 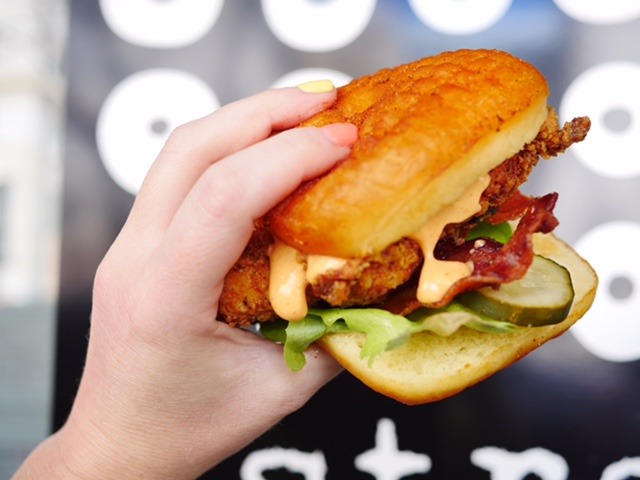 Old Bay All Day at Astro Doughnuts and Fried Chicken

For dessert? Their special cherry blossom doughnut, filled with cherry jam. I will never NOT be impressed when doughnut shops fill doughnuts that have a hole in the middle. Am I easily impressed? Maybe. But this hole-y treat is certainly praise-worthy! 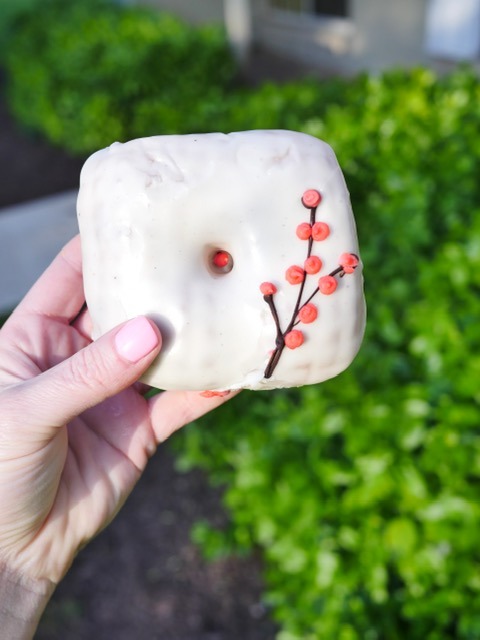 Check out this underground doughnut tour for more sweet surprises!

I needed to get at least one spot from the “M” in my list of the best food in the DMV! Thankfully, a friend from Annapolis had me covered! Iron Rooster is known for their homemade pop tarts and these were buttery, contained ample filling, and didn’t skimp on the icing and decorations! 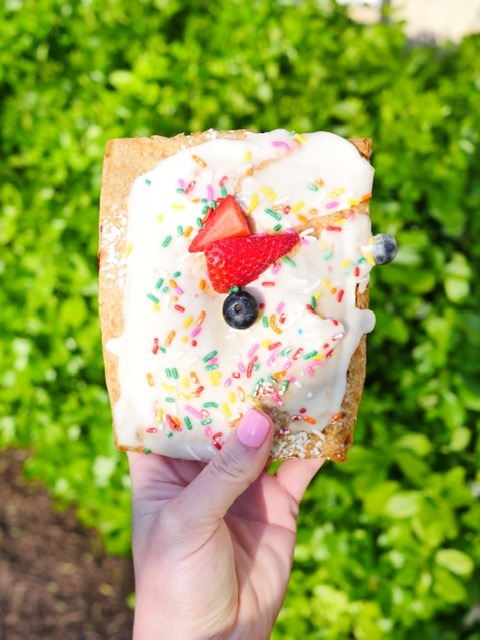 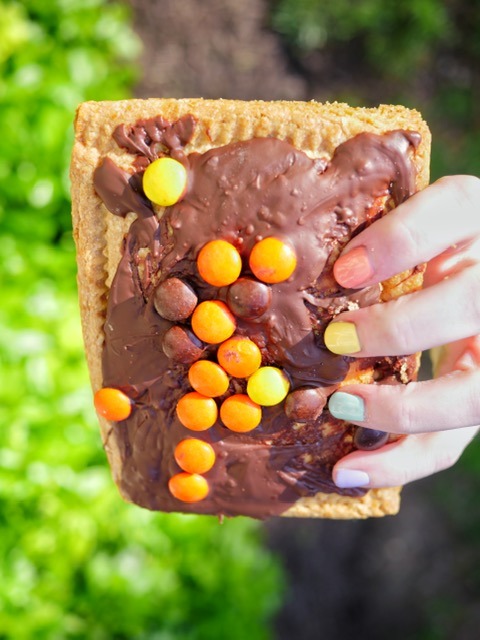 I hope you’ve enjoyed this compilation of good places to eat in Washington, DC for a first-time visitor! Is there another restaurant I should add to the list? Let me know in the comments!

Pin this post to remember cool places to eat in Washington, DC! 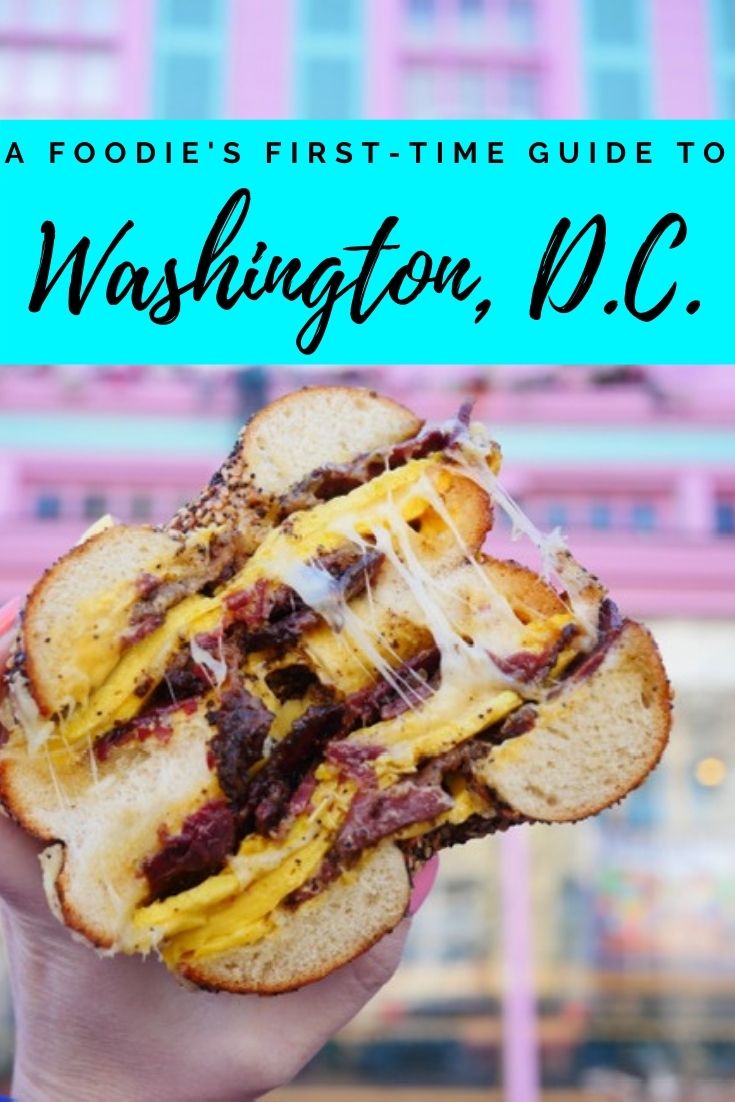 Pastrami Sun City is my favourite and very tasty. It is also cheaper than other places for lunch in DC.

I'll have to check that out next time! Thanks for the recommendation!

Next try to score a seat at Rose’s Luxury, down the block from Ted’s Bulletin. Michelin starred. Endless small plates. You’ll never stop ordering. Especially if you bring along a sharer. Walk-in counter seats are always worth a try.

Thanks for the tip! I'm a sucker for small plates and sharing so I can try everything!! I just Googled it and the link was purple... I remember ogling over their menu!! Hopefully I'll get to try one day!