If you’re planning a trip to the Big Easy, you might be thinking, “shouldn’t this be… easier“? There is so much to see and do and eat and drink, and TBH, you need one of those Hurricane cocktails now! I recently visited my cousin for a girls’ weekend in New Orleans. She’s been curating the best of NOLA for years, and we did so many fun things in such a short amount of time. Now, I’m passing it along to you! If you are looking for the most fun-filled 2 day New Orleans itinerary, this is it! Cue the brass band, because it’s time to boogie!

Day 1 of the most epic New Orleans 2 day itinerary

As soon as you get off the plane or drive into the city limits for your weekend in New Orleans, head straight for Katie’s. The authentic cajun and creole menu is full of so many things I hadn’t seen anywhere else— swamp fries, seafood-stuffed mushrooms, blackberry jalapeno ribs, and so much more. In the end, the crawfish beignet was calling my name as a starter. Love crawfish. Hate peeling. This was the best of both worlds! 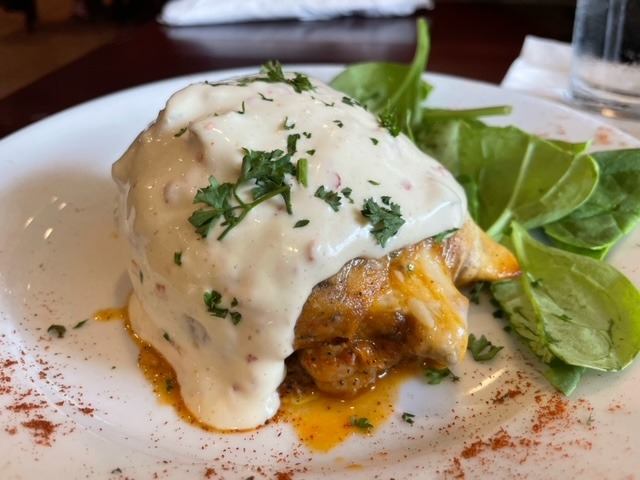 For the main course, we split a fried shrimp and oyster po-boy. Some say the term originated at the Martin Brothers’ French Market Restaurant and Coffee Stand; the brothers fed striking streetcar drivers (poor boys) in 1929 with large loaves of bread stuffed with cheaper cuts of meat. Of course, history isn’t always cut and dry, and there are plenty of other origin stories for this sandwich! However it came to be, I’m glad this one made it to my plate! 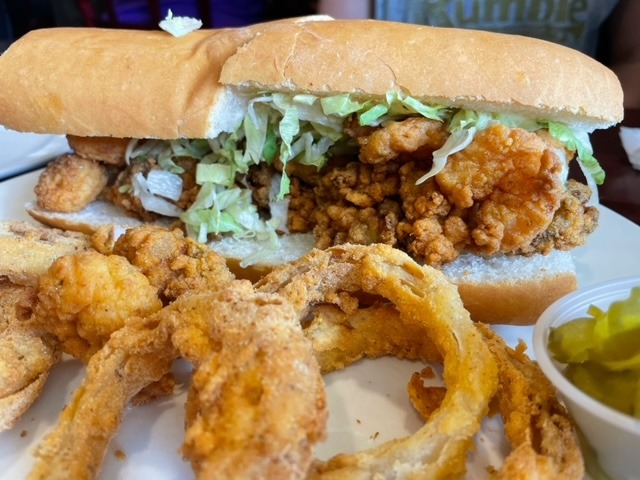 At Sucré on Magazine St., traditional French patisserie meets modern New Orleans flair for a sweets emporium unlike any other. Glittery cupcakes shimmer behind glass and tiers of macarons beckon you to taste the rainbow. I opted for the bread pudding, which uses leftover pastries to create a one-of-a-kind treat! 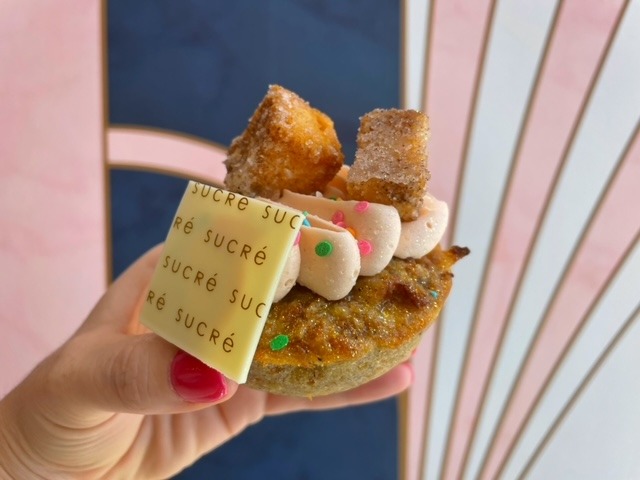 Go for a spin at Carousel Bar

No… it’s not the alcohol! Carousel Bar *actually* spins! While it’s tricky to get a coveted spot on the carousel, I actually loved sitting in the corner and admiring the intricate animal paintings on each chair.

If you were the kind of kid who loved an old-fashioned root beer float, your inner child is going to LOVE the Monte Brown Cow. This drink combines Wheatley vodka, Gambino’s King Cake Rum Cream, Abita root beer, vanilla, simple syrup, and chocolate bitters for a nostalgic taste with a grown-up kick. I traveled to New Orleans with a carry-on, but checked in on the way out thanks to a big bottle of King Cake Rum Cream, so I can try to recreate this drink at home! To get the full effect, I’ll spin around a couple of times before I drink. 😉

This was my first tiki experience, and apparently, I started at the top! I mentioned my trip to New Orleans to a bartender in Portugal, and he knew all about Beachbum Berry’s! I will always order a drink with a mermaid and a giant squid, and the food selection sticks to the theme! You can try Spam sushi, a pu pu platter, or crab rangoons for an island vibe. 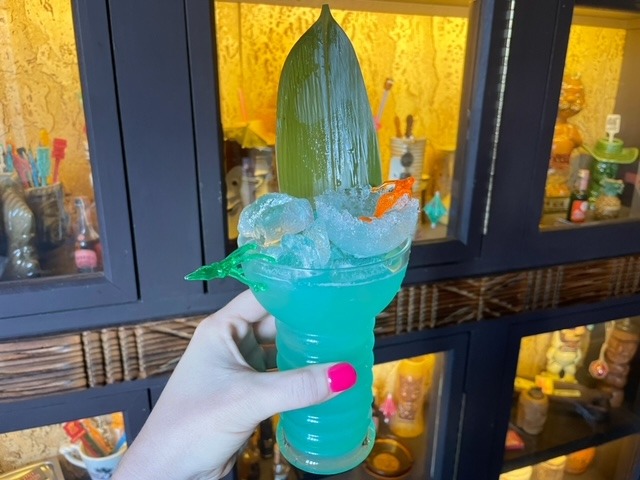 That is— you bring your own alcohol, not your own ghost. I’m a total scaredy cat, so the liquid libations were necessary to get me into a jovial kind of mood. Before going to the meeting spot, we stopped at Lafitte’s Blacksmith Shop Piano Bar and Lounge. In addition to being the oldest bar in the USA (it opened in 1772!!), it also is rumored to be haunted. I didn’t see any spirits here, but my voodoo daiquiri had plenty of alcoholic spirits in it! 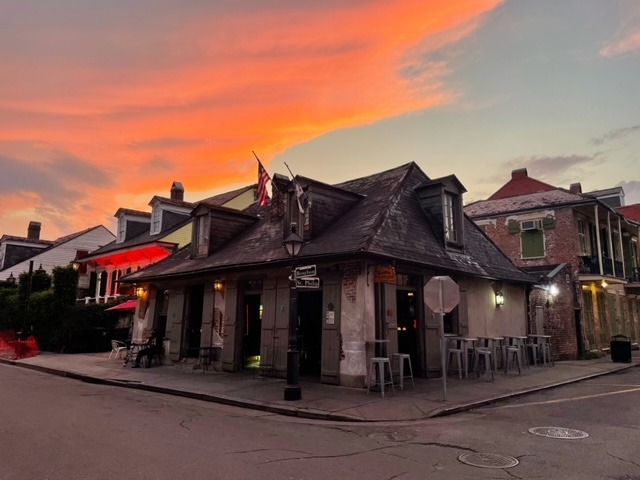 The Ghost Tour starts at a bar, where your ghost hunter guide checks everyone in and sets the mood. Once on the bus, you’ll be directed to download a ghost-hunting app on your phone. The tour first stops at a Masonic cemetery, where the ghosts said things like “my bones,” “be brave,” and “broad.” 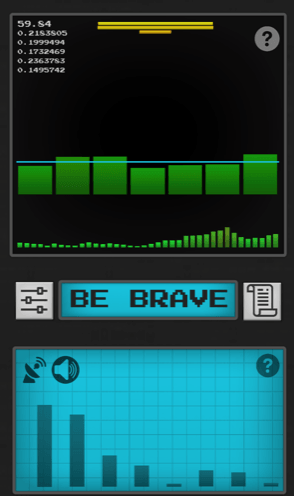 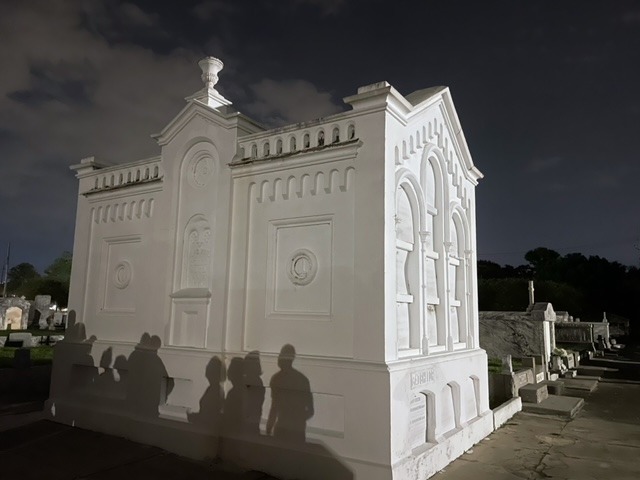 The mood was light-hearted as we made our halfway stop at Morning Call Coffee Stand for beignets and bathrooms.

Then, we went to the Katrina Memorial and the abandoned Charity Hospital cemetery. I didn’t see any ghosts, but the mood was much more somber. The Katrina Memorial commemorates over 1,100 lives lost in the 2005 hurricane. The hurricane-shaped memorial is built on the site of the Charity Hospital cemetery, where thousands of unclaimed victims of yellow fever and influenza viruses are buried. The guide was respectful and shared personal stories from his experience during Katrina. 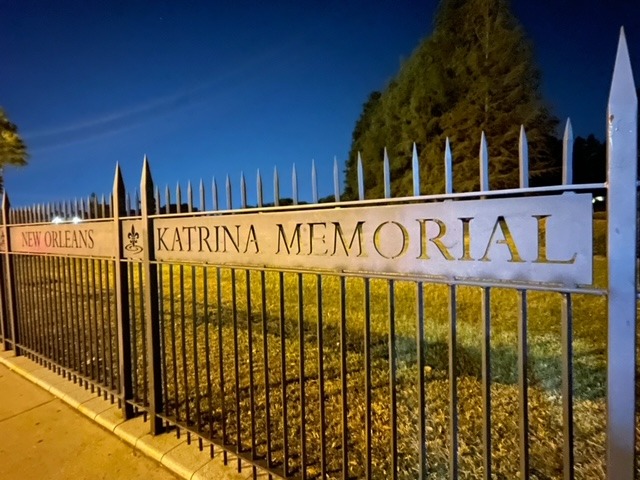 Our guide urged us to walk backwards through the gates to ensure nothing followed us out. You better believe I moonwalked myself onto the bus. I’m not taking any chances.

Did you know that Bourbon Street isn’t named after “America’s Native Spirit”? In 1721, when the streets of New Orleans were being laid out by a French engineer, he chose one to bear the name of the current ruling French royal family. And thus, Rue Bourbon was born!

2 day itinerary New Orleans: What to do on your second day!

Begin the day with beignets

If you’ve done any research on New Orleans, you’ll probably have seen Cafe du Monde mentioned in every guide and New Orleans blog. And there’s a good reason for that!! Cafe du Monde’s beignets are delicious, the service is efficient, and there’s a brass band playing just outside the seating area for ambiance. Don’t miss the frozen cafe au lait— the sweet, caffeinated drink is the perfect kickstart for a jam-packed day spent exploring New Orleans. 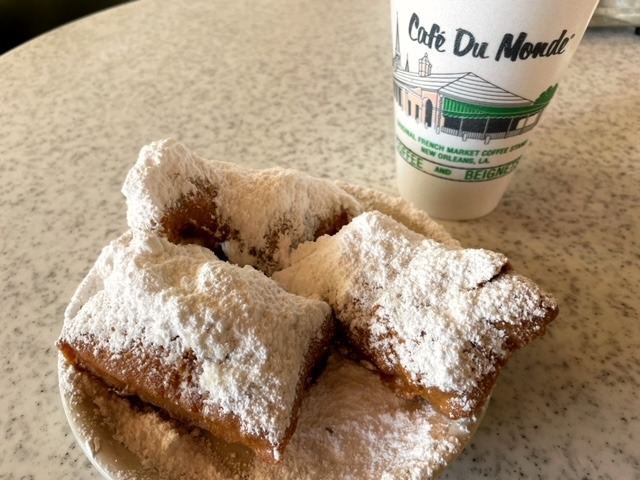 You’ve probably seen VooDoo dolls portrayed as a way to inflict pain and suffering on an evil ex or a back-stabbing friend. This VooDoo Queen Tour changed how I’ll look at the religion of VooDoo forever, and I think it’s a must-do tour for every visitor in New Orleans.

Marie Laveau began her career as a hairdresser but became known as the most powerful VooDoo queen in the city. If you’ve ever sat in a beauty parlor chair, you know that all kinds of information is shared in salons. The VooDoo queen used that knowledge to secure her position as a clairvoyant, and gave clients practical advice and sold charms that would help their wishes come true. 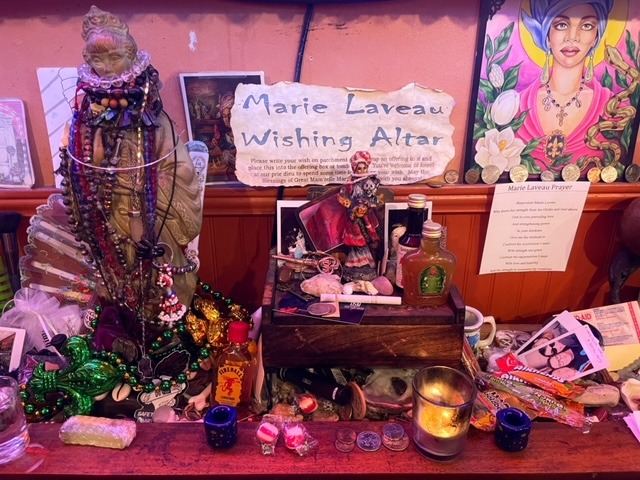 On my tour, I learned that VooDoo dolls aren’t about inflicting pain on anyone. In contrast, the dolls were actually used as a pre-iPad medical chart. Locals would go visit a VooDoo priestess, complain of an ailment, and receive a cure. The priestess would mark the ailment on the local’s doll, which always stayed in the priestess’ practice, and she would follow up with the person on their next visit. Not so scary now, is it?! 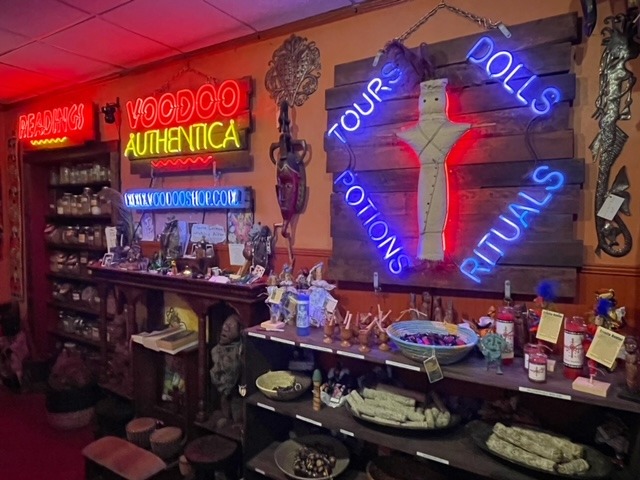 Are you ready to rethink the way you see this religion?

The tour ends at VooDoo Authentica, where the staff happily answers questions or can help you book a tarot reading or spiritual consultation. Don’t miss this shop!

New Orleanians wield a spice cabinet like no other culture I know. Every meal I had in New Orleans was perfectly seasoned, and I regret not bringing a suitcase full of seasoning home with me.

My advice? Try as much creole cuisine as you possibly can while you’re in New Orleans— you can’t get this anywhere else! Joey K’s was featured on Diners, Drive-Ins, and Dives, and has been a neighborhood staple for over three decades. I hope you’re thirsty because finishing one of their 18 oz. beers is quite the feat!

We came for the creole, but the star of the show for me was the eggplant napoleon.
The fried eggplant medallions are layered with fried shrimp and topped with crawfish cream sauce. The most delicious game of Jenga I’ve ever played! 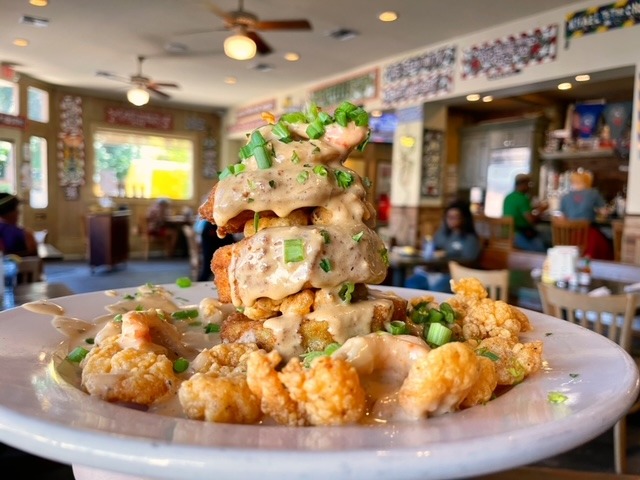 For our main course, we split creole jambalaya with chicken, shrimp, and sausage and sides of corn bread and mac & cheese. 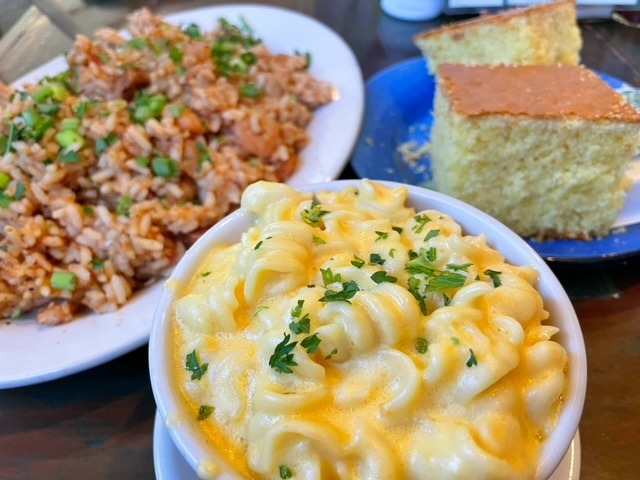 Their desserts looked amazing… but we were saving up for ice cream!

Stop for something sweet at Creole Creamery

If you’re feeling extra hungry, the Tchoupitoulas Sundae includes 8 scoops of ice cream and 8 toppings for $40. They also offer 4 or 6-scoop mini samplers, which I did not see when I visited, and I don’t want you to make the same mistake! 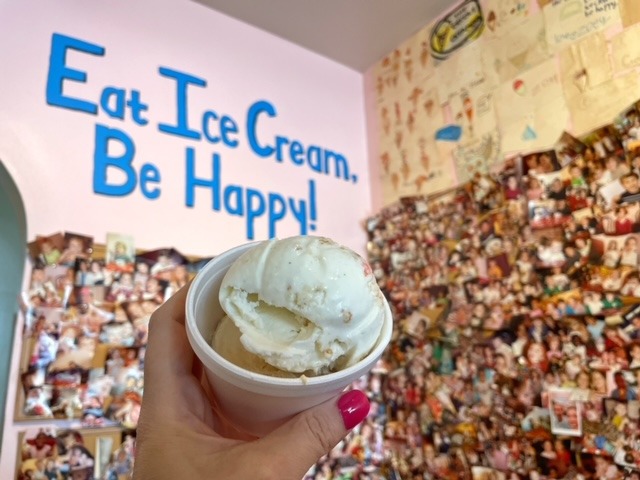 Columns is a hotel with quite a history! It was built as a family home in 1883 and converted into a boarding house during WWI. In the 1950s, the historic building was turned into the iconic hotel and bar it is today. Overlooking St. Charles Avenue, it’s easy to catch the streetcar after a drink on the porch to continue the party elsewhere! 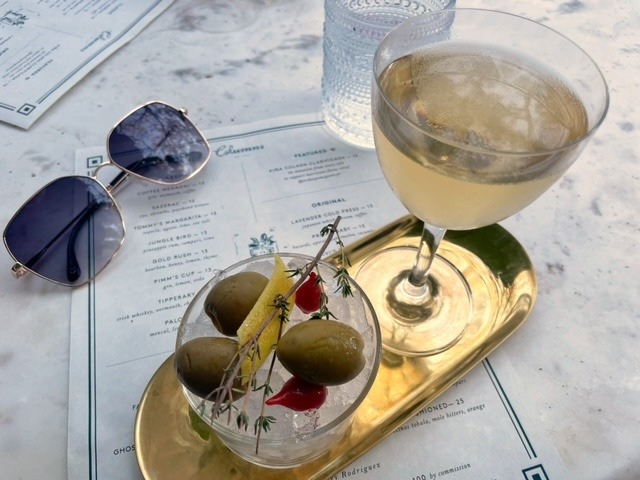 As the birthplace of jazz, you can’t leave New Orleans without checking out the local music! Join a tour to visit three of the best live music clubs, where you’ll experience jazz, swing, and brass music, taste some iconic cocktails, and visit a local art market!

Your weekend in New Orleans is coming to an end…

If you need coffee to wake up, District Donuts is the place to kick-start your day. They source and roast their own beans through their Cool Kids Coffee Roasters brand— creating one of the most epic lavender lattes I’ve ever drank. And we can’t forget the donuts! I had their cinnamon roll with a brûléed topping. The sugary, smoky treat hyped me up for my last morning in town!

Top off your trip with an Instagram photo tour

If you’re traveling solo or just want to make the most of your trip— without asking your Instagram husband for iconic New Orleans photos— book a 1-hour Instagram Highlights Tour with FashArt Photo Walk! Christian rocked up in head-to-toe pink with a wagon stocked with snacks, drinks, music, and props. We had a blast strolling through the Marigny neighborhood. Christian recommended fun poses and props, and at the end of the tour, she Air Dropped more than 200 photos and videos to me! (Don’t worry, Android-users! She’ll transfer them to you on WeTransfer!) My Instagram is still filled with pictures from that hour! 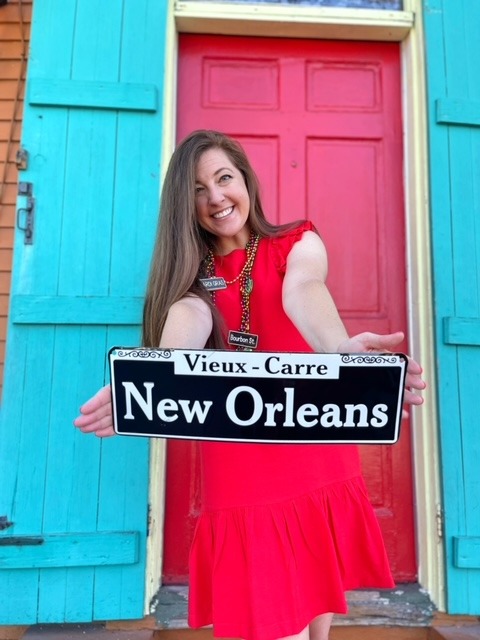 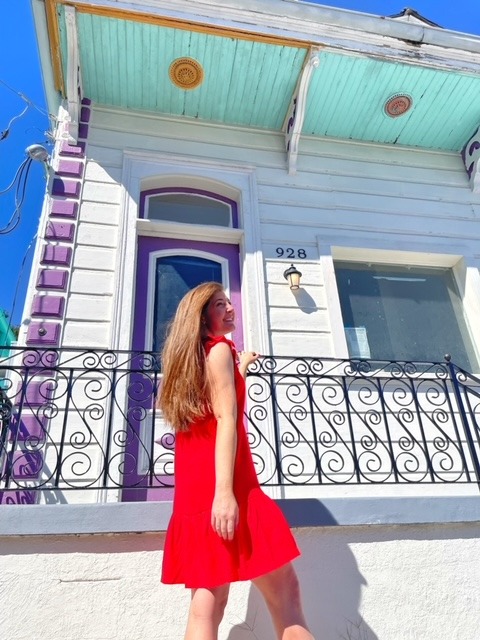 Get your fusion on at Muk Bang

All good things must come to an end, but there’s time for one more meal before heading to the airport! Mukbang Seafood pairs Asian staples with a NOLA twist. We started with their famous bulgogi fries, which were an absolute flavor explosion. 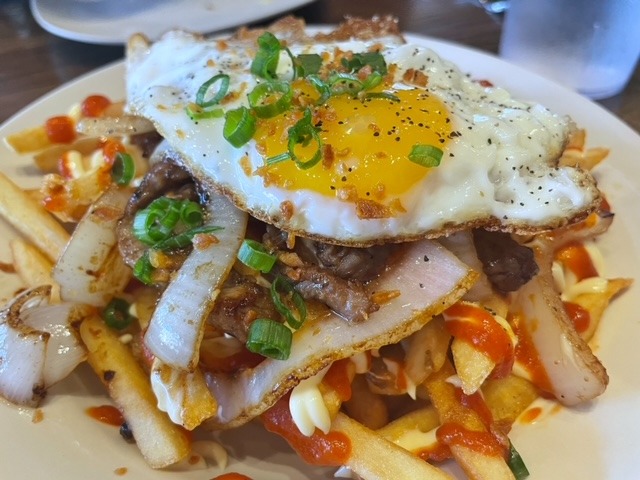 Next up: garlic noodles with blackened catfish. The fish was perfectly-spiced and a perfect farewell to Creole country. I’m not sure I’ll ever see catfish on a menu where I live in Portugal! 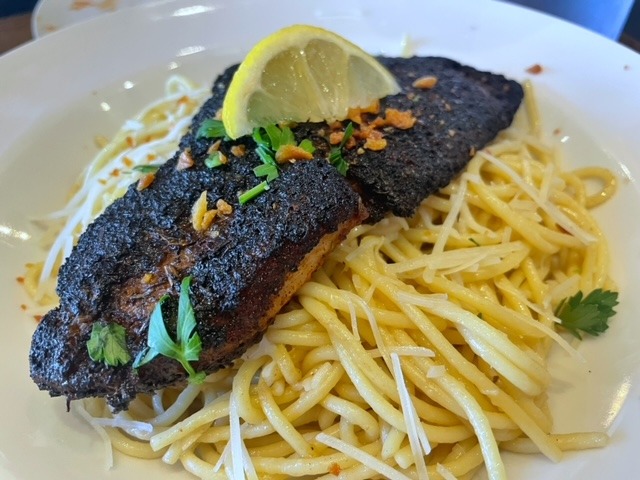 This was my first visit to New Orleans as an adult, and it definitely won’t be my last. There’s so much history to soak up, food to eat, and cocktails to try. After this girls weekend in New Orleans, I think I’ll need a week to explore next time!

Where to stay in New Orleans


Save this weekend in New Orleans itinerary for your next trip! 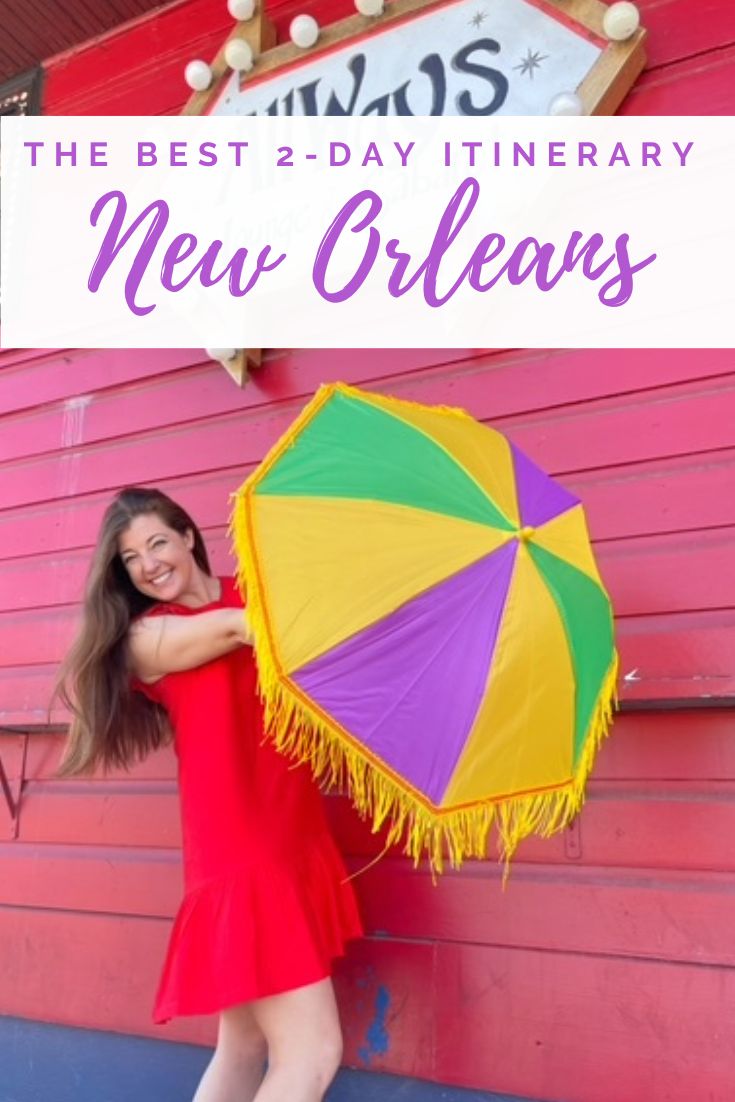 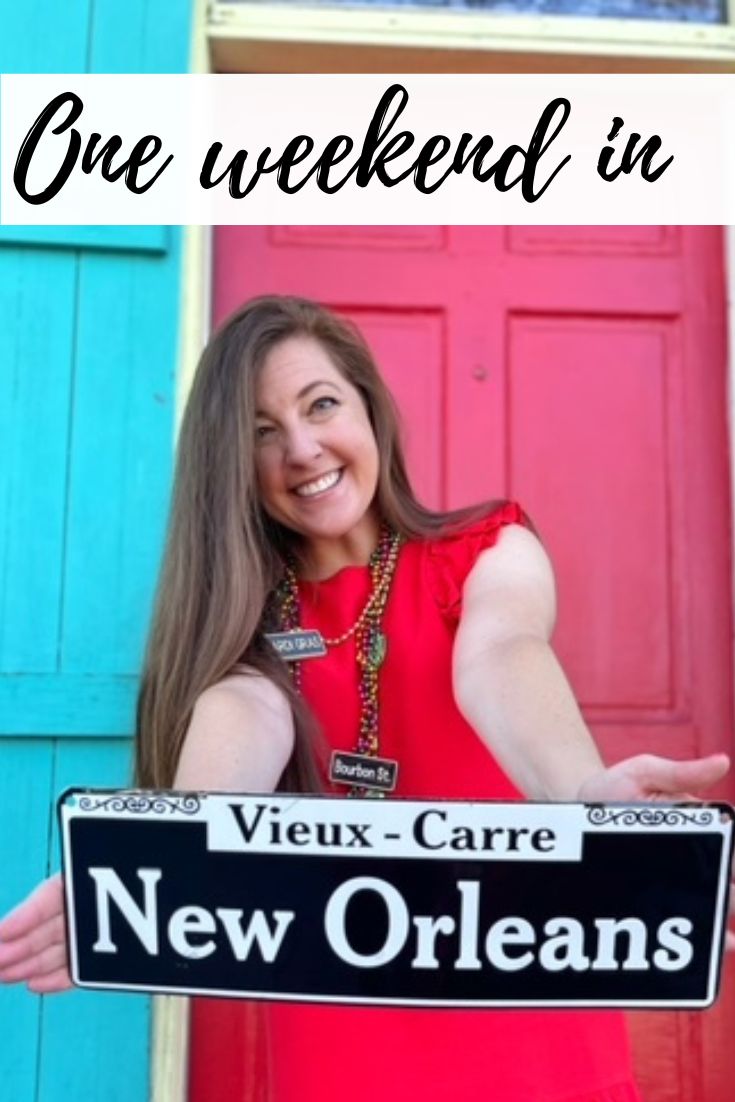