On August 19, 2015, I left Dallas, Texas and boarded a one-way flight to Madrid, Spain. I was ready for the adventure of a lifetime— one that I expected to last for two years. I planned to travel through Europe, Thailand, New Zealand and Australia. As an ex-wedding coordinator, I’m a spreadsheet girl and had my first four months planned out before I left the US.

What I didn’t know then was the joy that can be found in the unknown. Since 2015, opportunities have arisen around the world that I couldn’t have imagined from my desk in Dallas. I joined a team of 30 travel bloggers on a bus around Kerala, India, I was invited to promote Munster Vales, Ireland as a new tourism destination when the newly-named region was only 2 days old, and I’ve ridden a bicycle on a high wire in Bohol, Philippines in collaboration with Better Man Tours. And those are just three of dozens of collaborations through the years. 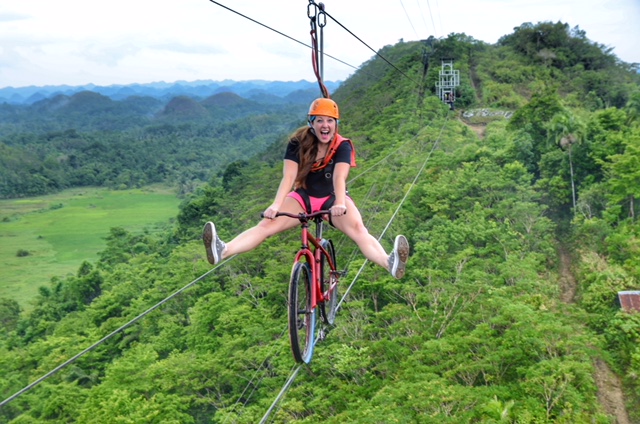 Over the years, I’ve loved receiving questions from readers all around the world as they plan their holidays. It makes me so happy to hear that you’re using my itineraries and advice as you plan your travels! In honor of my third anniversary on the road, I asked if you have any burning questions you’d like to ask. I’m going to skip right over those “Are you single?,” “Why aren’t you fat?” and “Will you marry me?” questions and get right down to the good ones.

This is the most common question I’m asked. And the answer is YES! I’ve seen so many bloggers order gorgeous desserts only to photograph them, take a bite and leave. I started this blog because I truly love dessert, and it would be a tragedy to not eat as much as humanly possible. 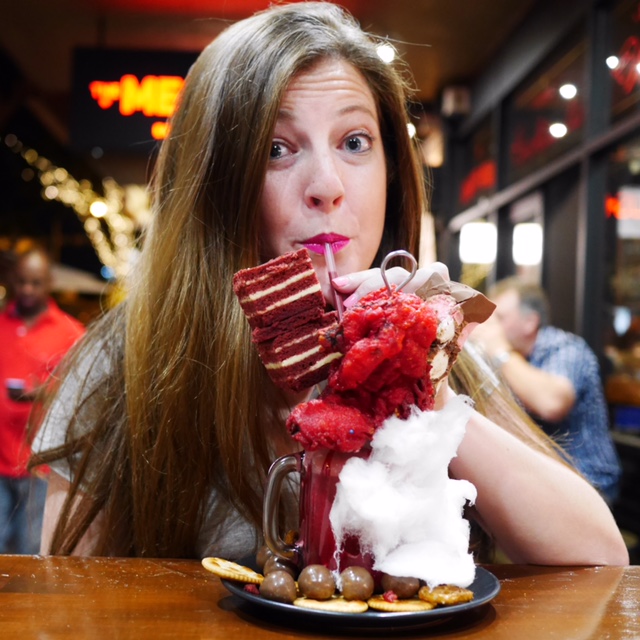 Don’t take my word for it! Here’s one of my favorite travel buddies’ testimonial to my eating habits:

The first time I met Brittany and checked out her blog, I remember thinking “we are going to be great friends, but there is no way this girl eats all of those sweets!” Boy was I wrong! In one of our first of many brunch Saturdays, I watched Brittany casually eat not one but two donuts, followed by an entire brunch filled with sweets, and an almond crossaint to top it all off for good measure. This all took place in a three hour window, and it was at that moment that I realized Brittany was a superhuman that ran on sugar alone. She truly has the biggest sweet tooth (and heart!) of anyone I met while traveling, and I am so lucky to know her! – Emily (that’s her with me in the Cage of Death!) 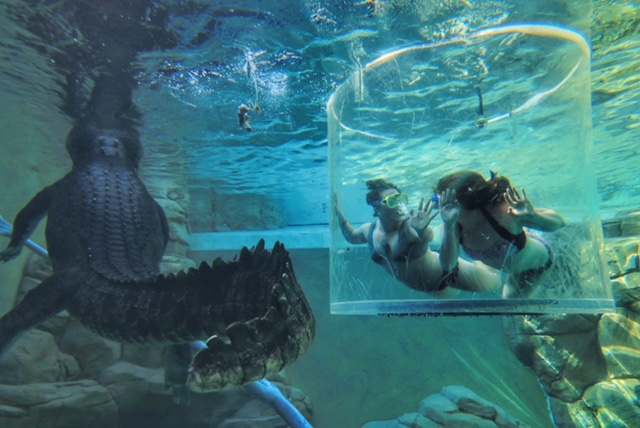 How do you make money?

I left the US at age 29, when working holiday visas were still a viability for me. I’ve done front of house/ marketing work at a cupcake shop in Queenstown, New Zealand, admin at a vehicle leasing corporation and documentation at a luxury travel agency in Melbourne, and I worked as a server in Exmouth, Western Australia at a restaurant that required me to wear a cowboy hat.

Working holiday visas expire at 31, so I’ve unfortunately aged out of that option. These days, my income is made up of advertisements, affiliate links (like this one for booking.com and this one for GetYourGuide), dessert pun merchandise, dessert tours, sponsored blog and Instagram posts and social media management. If you think we might be able to work together, I’d love to chat!

Are you finished in Australia?

I traveled to Australia for the first time in December of 2015 for a Christmas holiday with my family. I fell in love with the country and the people and had some amazing experiences in the Blue Mountains, Hunter Valley, Cairns Uluru and Sydney, culminating with an amazing New Year’s Eve in Sydney Harbour.

When I came back in August 2016, I began what I believed would be a one-year working holiday visa. In November of that year, the government changed the rules for American citizens in Australia, offering the opportunity to work above the Tropic of Capricorn in tourism, hospitality or agriculture to earn a second year on  the working holiday visa. I packed up my bags in Melbourne and headed for Exmouth, Western Australia where I worked at a Nashville-themed restaurant and pub, scoring a second year on my visa!

Now, my visa’s run out. Although this time in Australia is over, I’ve made lifelong friendships that transcend visas and I’m sure I’ll be back!

If you are traveling for the first time, what’s the best place to start outside the US?

Where are you most excited about traveling? To spark the travel bug, go to the place that looks the most interesting to you! My first international trip was to Italy. One gelato and I knew I’d be a lifelong traveler!

What’s your favorite place in Australia?

Please don’t make me choose!! I love the food, festivals and ease of life in Melbourne and the beautiful reefs teeming with whale sharks and humpback whales in Exmouth. I love the culture of Uluru and the sunsets in Broome. If I had to choose, though, I think Exmouth is one of the most amazing little towns with so much beauty in the reef, the range and the hearts of the people. 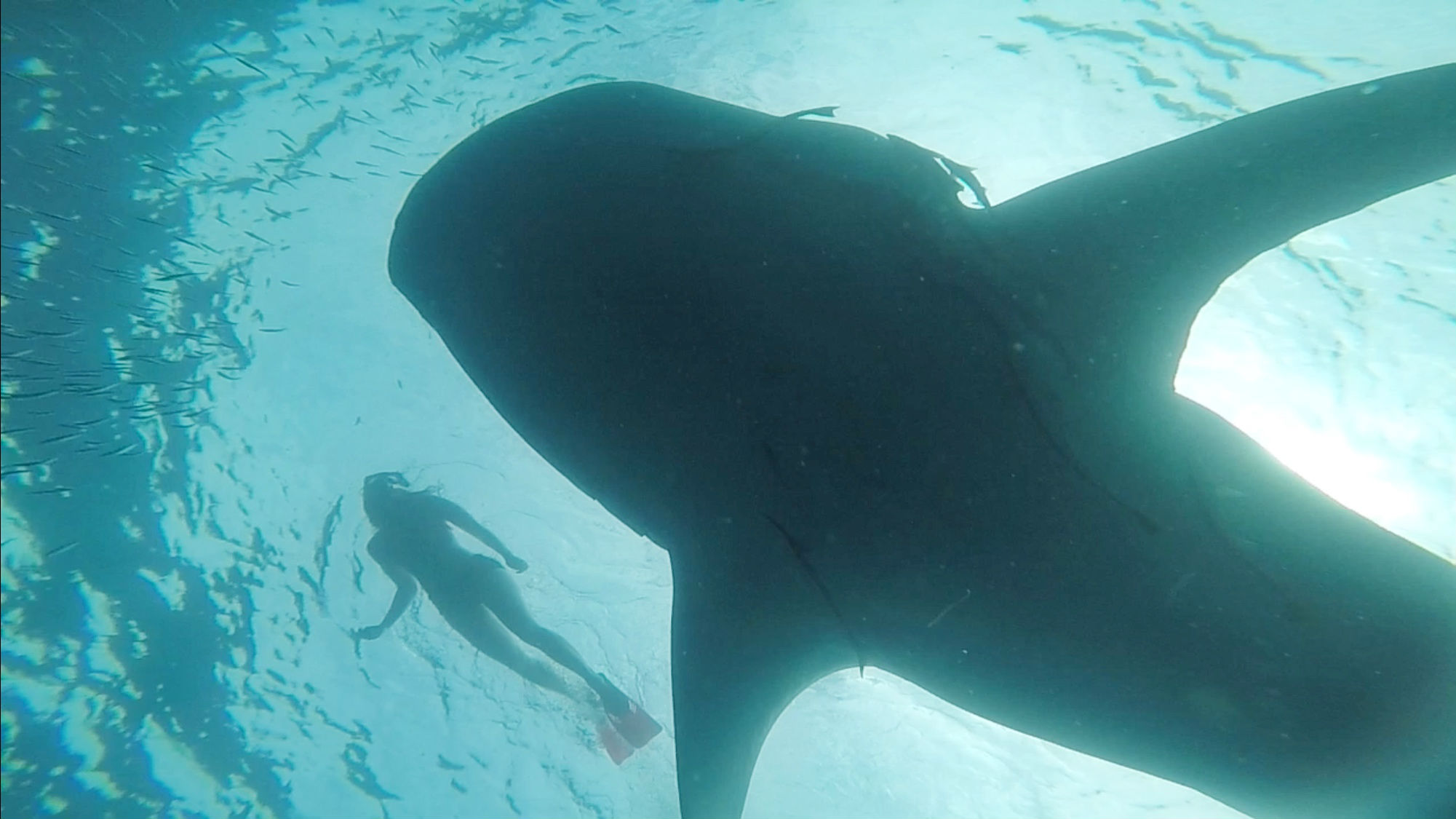 What’s your favorite destination so far?

I’ll say it again! Please don’t make me choose! I do have a top three though.

What would you say to people who say travel is out of reach or maybe just don’t know how to start?

Start small! You don’t have to sell everything you own and travel around the world for three years! If you’re short on time or cash, be a tourist in your own city or state. I loved exploring my hometown on a recent trip, where I made it my mission to check out all the best desserts in Dallas!

Start a travel fund and set money aside each paycheck. Join email lists like “I Know the Pilot” for cheap fares from Australia, and be open to exploring lesser known locales. I also love the “Everywhere” search feature on Skyscanner for cheap options to destinations I hadn’t considered.

Above all, trust that the experience will outweigh the fear.

What’s the best part of nomading?

Hands down, the people. On my personal Instagram account, I titled a photo with friends: A Malaysian, a Scotsman, an Australian and a Texan walk into a bar. No punchline… that’s just what happened tonight.

What would be your super power?

If I could have any super power, it would be teleportation for sure. I’m writing this from an airport lounge as I wait for a flight that’s a few hours delayed. Plus, flight costs are the WORST!

Has there ever been anything you’ve regretted eating?

One of my best friends from university met me in Thailand for an awesome week exploring Chiang Mai. On one of our tours, we had the opportunity to try cricket and silk worm. LeeAnn remarked that the cricket tasted like shrimp and the silk worm tasted like coconut. I tried both. And that was the moment I realized my friend lied to me. At least we both agreed that we didn’t love durian. You can check out the video here. 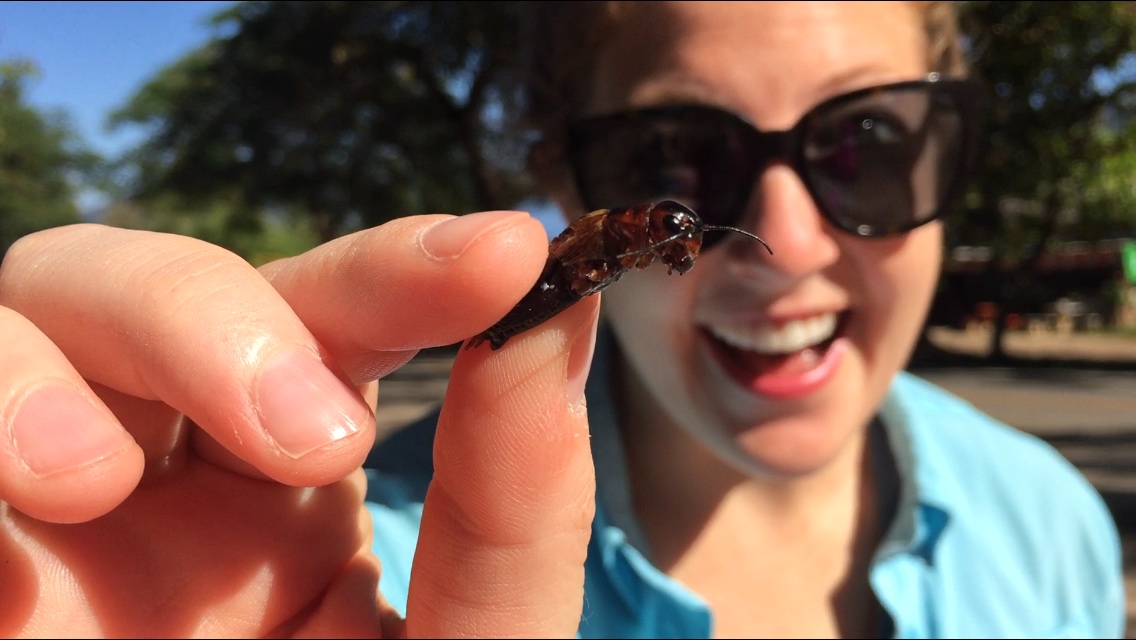 How do you make the places you travel feel more like “home”?

I carry around a full sized Texas flag in my suitcase, which is hung as soon as I settle into one place for more than 3 days. I also tend to keep a steady supply of Hidden Valley Ranch Dressing, Frank’s Buffalo Sauce and Chick-fil-a sauce, which all taste like home to me.

The majority of countries in the world offer super cheap international plans, so I talk or text with my family almost every day!

What’s the most unique interaction you’ve had during your travels?

When I was traveling on the island of Capri in 2015, I was still getting used to the solo travel thing. I hadn’t built up the extensive network of international friends and had no idea that blogger support groups existed. And so when the restaurants recommended by my hotel were either closed or turned me away for dining solo, I fell into a bit of a funk. I went back to Hotel La Tosca where I planned to go to bed early and try again the next day.

The owner of the hotel, Ettore, questioned my early return, and I told him (through rapidly forming tears) that I was unable to get into any of them on my own. (Apparently, a solo traveler taking up a table that could hold four isn’t lucrative enough.) Embarrassed by my tears, I attempted to move quickly past him, and he stopped me and said he’d heat up some breakfast foods for me to have for dinner. And when I moved to take it back to my room, he offered that I could sit in the lobby to chat with him in case I needed to talk.

You see, he’s a dad with daughters who live with his wife back in the US. He’s in Italy for the tourist season, running the hotel, and he goes home to be with them for the rest of the year. We had a great chat and that one experience lifted my spirits in the way no dinner on the island of Capri could have done on its own. I’ll forever be grateful to Ettore and all the others along the way who’ve taken a moment to care.

What was the most unexpected thing you experienced while traveling?

When I was preparing to leave the US, I read blog posts on staying safe as a solo female traveler. I left home with a king sized pillowcase with the intention of stuffing my valuables and the hostel pillow inside in order to sleep with my stuff. And I seriously considered buying a ridiculously heavy chainlink lock to enclose my backpack. After reading all the warning posts, I was sure I’d be targeted, so I chose neutral colors for my clothes and luggage.

Once I actually left the US, I found that people all around the world are basically the same. We’re all looking for a friendly face, a helping hand and a good experience. Are there bad people in the world? Of course! Should they determine whether I live my life in fear? Absolutely not!

So now, it’s neon clothes, purple luggage (paired with a good sense of intuition and a luggage lock). 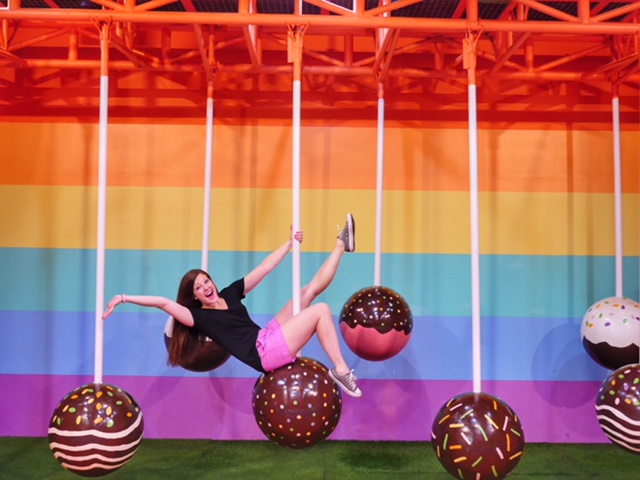 Thanks for sticking around— If you have any requests or additional questions, leave me a comment or send me an email! 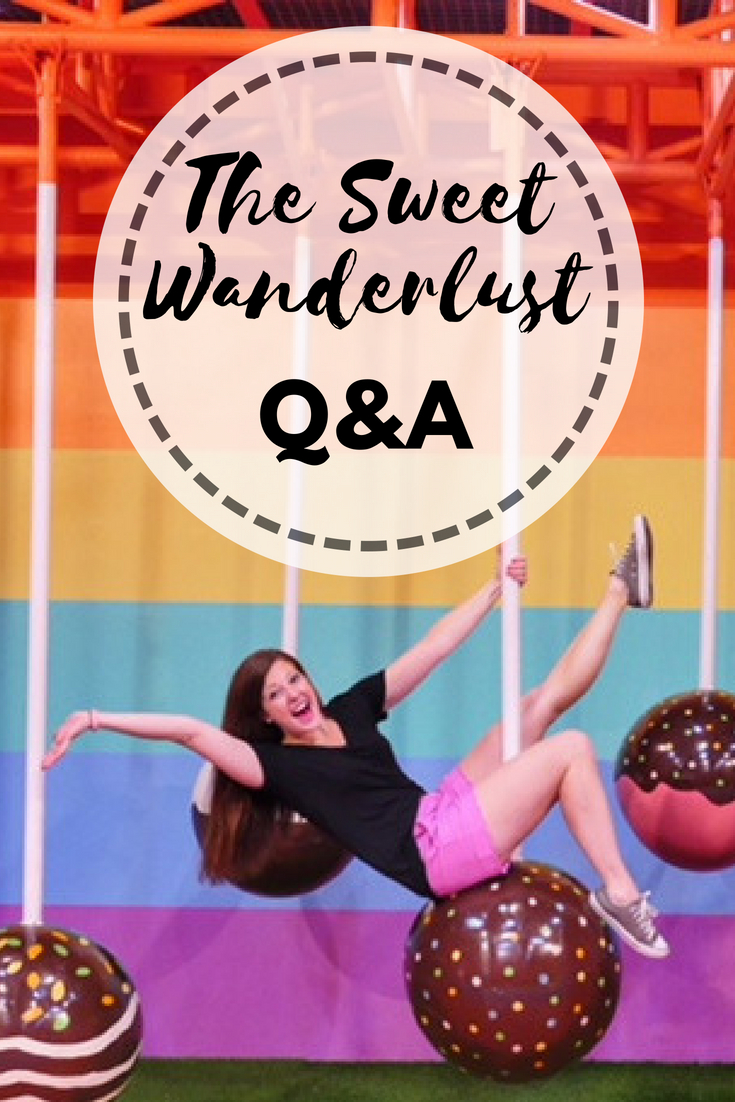