If the thought of jumping headfirst off of a bridge with your legs tied together makes your palms sweat and your face go green, you’re not alone. I never intended to bungy jump. I wasn’t scared per se… but watching Instagram videos of crazy Queenstown bungy jumps was a surefire way to get my heartbeat up, so maybe I was just a little anxious.

Soon after arriving in Queenstown, though, I became intrigued by all the happy jumpers. You know the ones—they’ve got red and blue marker on their hands, courtesy of AJ Hackett, walking around with an air of accomplishment. They’re thrilled to tell you about their jump—whether it was a fearless leap or a reluctant plunge after 10 minutes being talked off the ledge.

After several encounters with accomplished jumpers, I decided to join their ranks. Soon, the idea of “I jumped off everything in Queenstown” was born. Not only would I complete a bungy jump… I’d complete every bungy jump Queenstown has to offer.

Note: This post contains affiliate links. If you click on one and make a purchase, I may earn a small commission at no extra cost to you.

Ready to bungy jump Queenstown? Choose the right one for you!

I started my jumping journey with The Nevis swing, easing my way into this mission. There’s nothing easy about The Nevis Swing, though! It’s the world’s largest swing, and will take you from a launch deck 160 meters above the canyon floor along a 300 meter arc to the other side of the canyon.

I loved the Nevis Swing because it gives you the freedom to choose how to swing (forwards, backward, upside down) and can be done alone or with another person. I brought along a friend and we opted to go backward. If I were to do it again, though, I’d go forwards for an extra adrenaline rush. There’s nothing like the feeling of your stomach dropping as you race towards the ground, swinging at 120 km/hr!

The AJ Hackett team is awesome, and although I was eager to get swinging, my friend was a little nervous. (On my very last jump, 3 months after the swing, the bungy crew remembered how loud my friend screamed!) Instead of a traditional “1, 2, 3” countdown, they let us go before her nerves became full-blown panic. By the time we realized we’d been tricked, we were through the first arc of the swing and having a blast!

This activity kicked off my two-week road trip in New Zealand, and it was the perfect way to jump into the adventure! The Kawarau Bridge Bungy was my first bungy jump, which was appropriate since the Kawarau Bridge is the world’s first commercial bungy. AJ Hackett and Henry van Asch launched this site as the “World Home of Bungy Jumping” in 1988… and 28 years later, we’re still throwing ourselves off the same bridge for a good time!

As excited as I was during the 20-minute bus ride and while getting harnessed up, I was completely unprepared for the fear that would take hold when I stood on the edge of the bridge. This anxiety led to a less-than-stellar jump, and you can see that I flopped around quite a bit in the video. In addition to being the world’s first commercial bungy, the Kawarau Bridge bungy is special in that you can opt for a water touch. It was a dry season when I visited, but I’d go back to get dunked in a heartbeat! Everyone who jumps gets a boat ride, though, as the bungy crew lowers you into a raft and takes you to dry land.

The Kawarau Bridge Bungy is the only tandem bungy jump Queenstown offers, so if you need a little extra help to jump, get strapped in with a friend and take the 43 meter (141 feet) plunge!

The Skyline Ledge Bungy just might have been my favorite bungy, as I was pretty proud of my double front flip. And the views as you’re raised back to the platform are unbeatable. For the rebels out there who want to do things differently… this is your bungy! The full-body harness allows for freestyle flips, twists, and flying leaps off The Ledge, situated 400 meters above Queenstown. The freestyle bungy jump is 47 meters (154 feet) of adrenaline!

If you’re visiting Queenstown in the winter, be sure to check out the after-hours bungy options. Ski by day, bungy by night, and keep the adrenaline going the whole time you’re here! I saved New Zealand’s biggest bungy for last… and it was worth the wait! Enjoy a scenic 45-minute drive out to the bungy site. Then, take a short gondola ride out to a suspended bungy pod over the Nevis River… plenty of time to psyche yourself out, or get completely pumped up for the Nevis 134m bungy jump.

Once you’re at the pod, you can watch other jumpers through the glass floor. Then it’s your turn to hop into a dentist-style chair to get prepped for the jump. Standing on the edge of the pod before the jump is enough to take your breath away… but the real fun hasn’t even started yet! One giant dive off the platform and you’ve got a full 8.5 seconds and 134 meters (almost 440 feet) of free fall. Talk about a rush!

Since I wasn’t strong enough to pull the cord that would release me to a sitting position, I got to enjoy the upside-down view just a little longer. I don’t think it was all the blood that had rushed to my head that made me want to jump a second time, though! How much is bungy jumping in Queenstown?

After jumping off everything in Queenstown, I’m hooked! Life in this cute town can get expensive, but there are some cheap activities in Queenstown and big savings if you know where to look.

Visit the AJ Hackett website for the latest discounts and combo packages!

Want even more adrenaline-fueled fun in Queenstown? Check out the new Nevis Catapult, where you can experience speeds of up to 100km/hour as you’re flung over the Nevis Valley.

Who’s going with me for round two?

Disclaimer: AJ Hackett hosted me on all three bungy jumps and the Nevis swing. All opinions are my own, though, and I wouldn’t recommend anything to you that’s not awesome!

Keep the adrenaline going with these awesome activities!

Want to try every bungy jump in Queenstown? Pin this post for later! 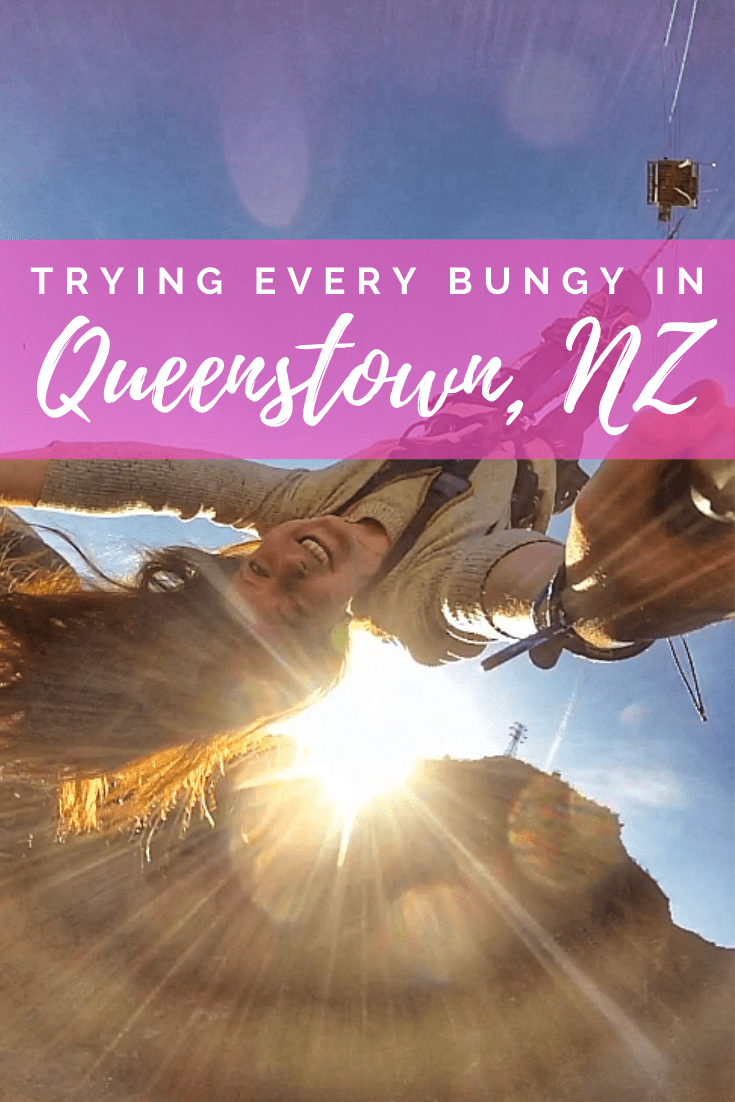 Totally Awesome!!! I really enjoyed reading this! Would love to try this someday!

This is so much fun!

Thanks! I hope you get to try it someday soon!