Duunnn Dunnn. These two fearsome notes elicit squeals from children in the pool. More than 43 years after its release, Jaws is still heralded as the reason many people stay out of the deep blue.

But in Austin, Texas, terror in the water is drawing thousands INTO the Lake Travis this summer. We all know that Austin is weird, so their JAWS in the Water event should come as no surprise. For the fourth year in a row, Alamo Drafthouse’s Rolling Roadshow dive-in movie has drawn thrill-seekers eager to experience the Blockbuster with the biggest bite in the most extreme way possible. Grab a ticket… you’re in for a wild ride! 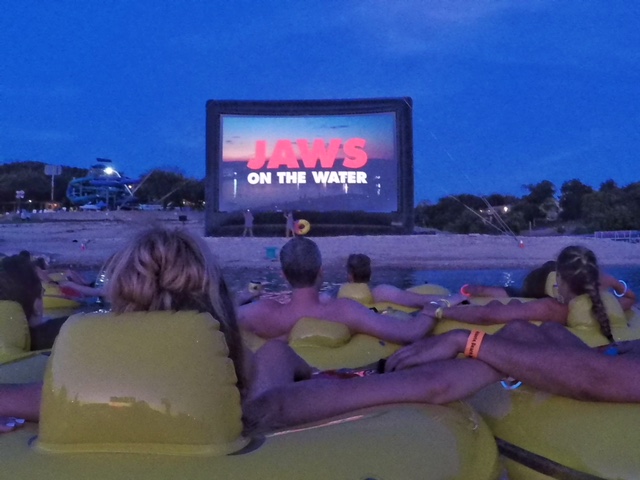 JAWS on the Water

Arrive at Volente Beach Resort and Waterpark at 6pm for a couple hours of aquatic amusement before the sun goes down. 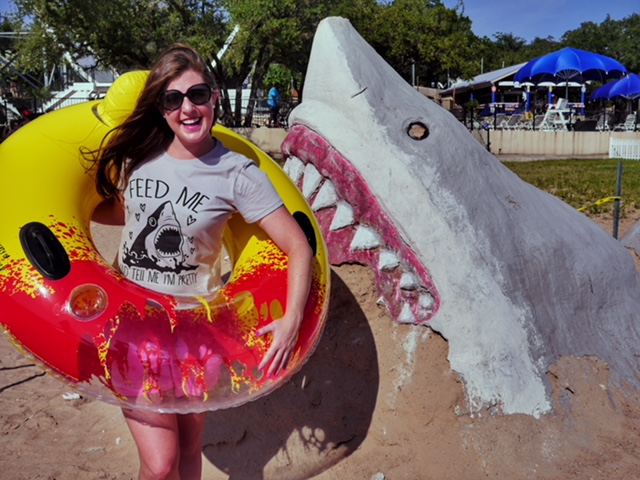 Hang out on the beach where you can visit an Amity billboard or Great White sand sculpture for the perfect Instagram shot. Need a “FEED ME and tell me I’m pretty” shirt? Get yours here 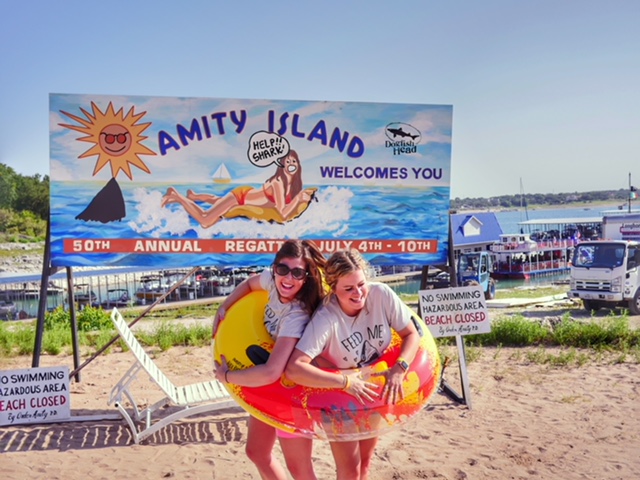 Two finned hype-sharks will be wandering around, too, so be sure to grab a shark-selfie! 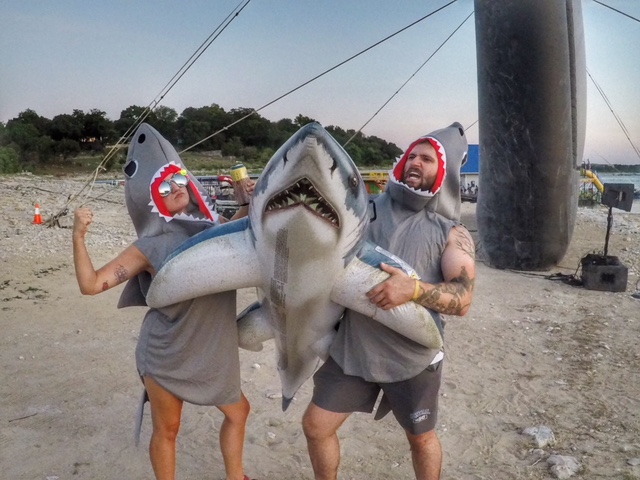 Volente Beach Resort and Waterpark offers lockers for $10, with in and out access all night. It’s a great way to store valuables (and have easy access to cameras and cash). We brought a GoPro

, which was great for the beginning of the movie, but once the sun went down, the light was too low for a good photo. If you bring a GoPro, be sure you’ve got a way to attach it to your tube so you don’t have to hold it all night. 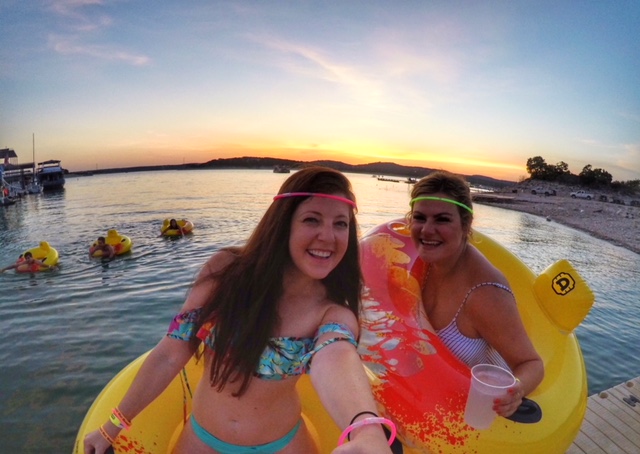 Buy a Billy Band or two if you’ll need some liquid courage to get through the night. These rubber wristbands are $4-6 and will be your drink tickets for the evening. 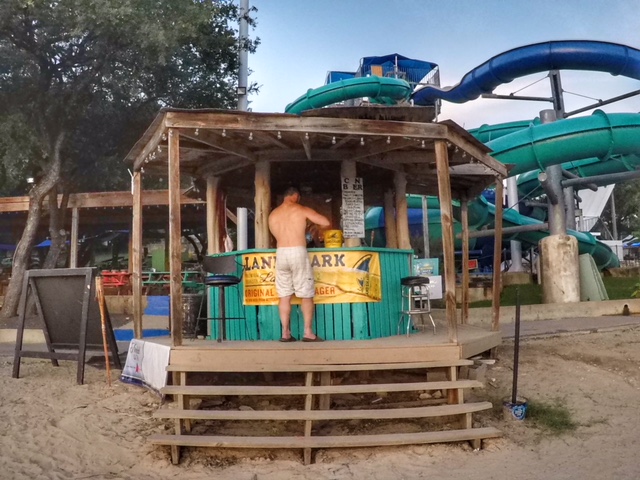 Stop by the bar before the show, or wait for in-water drink service. A wave of a glow stick

calls a waiter or waitress who will pass your drink to you in exchange for the wristband. As the bands and the beers get passed through other movie-goers, it feels a bit like a game of alcoholic telephone.

Grab your tube, glow stick and trash bag and head down to the lake at least 30 minutes before the show starts. The hype-sharks lead games, and you’ll want to get the best possible spot. I recommend securing a spot up against the back dock. It gives you a place to hold on and prevent drifting, plus, you’ve got easy access to the bar and exit once the movie’s over.

JAWS on the Water 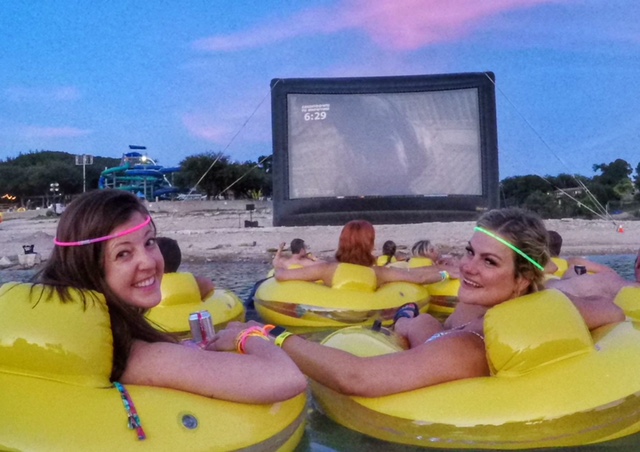 The experience starts with a compilation of funny shark movie moments and the mood in the lake is one of slightly nervous joviality. Jaws starts with shark attack number one on screen, and a scream from an inner tube near me alerts me that the scuba “shark” has made its first attack.

The scuba attacks were far less frequent than I imagined they’d be (or my neighbors were stone-faced and silent during the attacks). Even though I dangled a glow stick-clad arm off the tube, there were no nibbles in my direction.

Although the world has taken giant leaps forward in special effects, Jaws will always have a special place in history. Speaking of special effects… be sure to stick around until the end. It’s an explosive on and off the screen!

Spielberg’s cult classic will never go out of style… but you’ve only got a few more chances to see Jaws like this! Are you brave enough to get back in the water?

NOTE: I was hosted at this event. As always, all opinions are my own and I’d never recommend anything to you that’s not awesome! 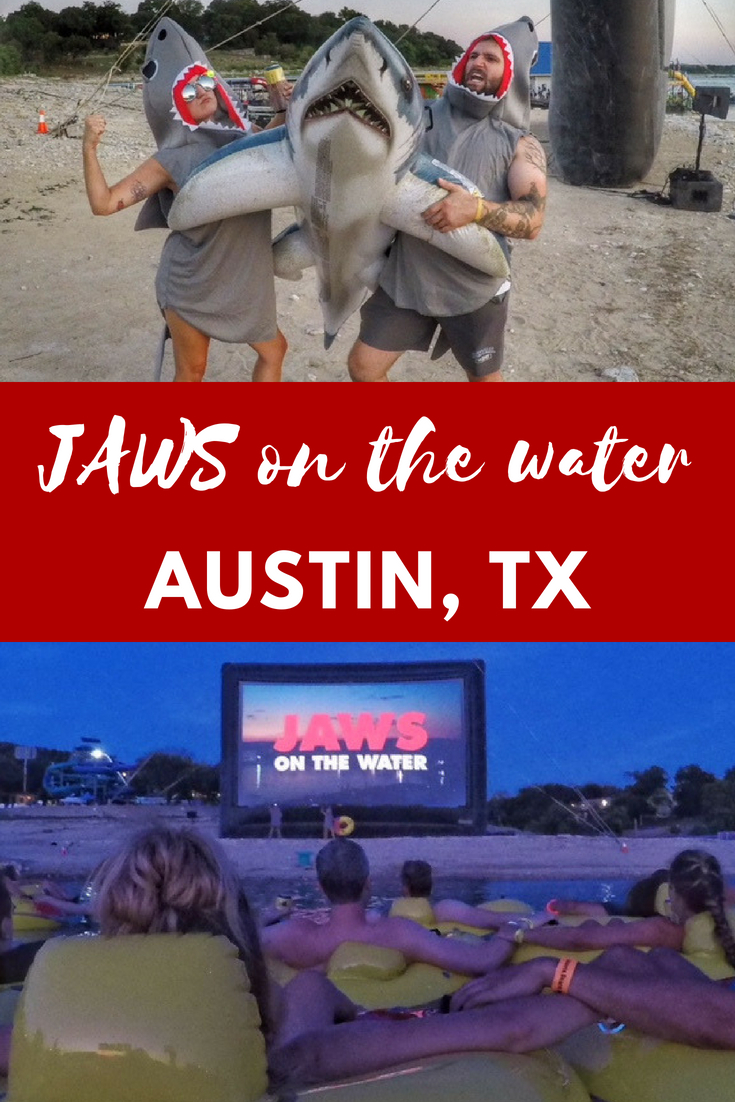