I signed up for a 7-hour Best of Ningaloo tour with Ningaloo Marine Interactions expecting to go swimming with manta rays in Coral Bay and experience some super awesome snorkeling on Ningaloo Reef. But the reality of the day was so much more than I could have imagined.

I’ve been geeking out over the experience and want to share why I love Ningaloo Marine Interactions so much.

The team at Ningaloo Marine Interactions is committed to providing a fun and educational experience for everyone who boards Utopia. When we understand the world around us, we take care of the world around us. I love that they’re doing their part to instill a love of the ocean so future generations have the chance to love it, too.

Frazer McGregor is the skipper of Utopia and has spent the last 9 years completing a PhD in marine ecology. His thesis has been instrumental in the implementation of the Manta Ray Identification catalogue, with nearly 800 manta rays catalogued.

Did you know that the markings on a manta ray’s belly are as unique as a fingerprint? If you submit a photograph of a manta ray that hasn’t been identified yet, you may get the chance to name it!

It’s always nice when photographing mantas and they flip over to have a look at you ? . . Taken on tour today with @ningaloomarineinteractions

Our warm up dive was at a shark cleaning station. We go to the dentist. Sharks go to the cleaning station. So essentially, we creeped on some sharks getting a root canal. We snorkeled over about 10 sharks who swam circles until it was their turn. At that point, the shark opened its mouth and a little cleaner fish swam in and took care of business. Who knew dentistry could be such a dangerous occupation!

Wild animals are, as the name suggests, wild. No tour can guarantee a sighting of a wild animal, but the team at Ningaloo Marine Interactions has been doing this for 6 years and have a pretty good idea of where to look. Plus, they’ve got eyes in the sky with a plane doing some of the more difficult spotting. On the day I went on tour with them, I was overwhelmed with the amount of wildlife we encountered!

Manta rays spend their life traveling or eating… sound like someone else you know? Moana’s grandma isn’t the only one with a manta ray for a spirit animal.

As Ningaloo Marine Interactions’ spotter plane searched the ocean to find a manta ray for us to swim with, we geared up and learned a little about manta rays. Fraser, the skipper who just so happens to have a PhD in marine ecology, prepared us for our first encounter with these majestic creatures and answered all of our questions. Unlike other rays, mantas are barb-less, rendering them harmless to humans.

Although manta rays can be spotted in many places around the world, Coral Bay is a special place to swim with mantas because the water is clear and shallow. Swimming alongside my first manta is an experience I won’t soon forget.

Glassy conditions yesterday with Isobel one of our resident and favourite manta rays. On tour with @ningaloomarineinteractions

In Florida, I had the chance to swim with a manatee… the sea cow of the USA. On board Utopia, though, I got to meet the manatee’s cousin, the dugong! With a perma-smile, I think it’s safe to call the dugong the quokka of the sea! We watched as the dugong swam near the boat, surfacing to breathe and giving us a good look.

The dugong. The happiest looking animal in the ocean @migrationmedia

Ningaloo Marine Interactions is the only tour operator that lets you get in the water with a tiger shark (pending conditions and its behavior, of course), and I was not going to miss this opportunity! When the spotter plane found a tiger shark, we watched from the Utopia for a few minutes before hopping in. This tiger wasn’t too keen to play though, and we got some good tail views.

The beautiful stripes. . . On tour with @ningaloomarineinteractions

‘Tis the season for humpback whales! We took a detour into the deep blue to cruise alongside two adult humpback whales and a juvenile. The shrieks of excitement almost drowned out the puff from the humpback’s blowhole when it surfaced right next to the boat!

Giants leaping on Ningaloo reef ?. . . On tour with @ningaloomarineinteractions

I could be reading too much into this… but I think the humpbacks were trying to send us a little love note! 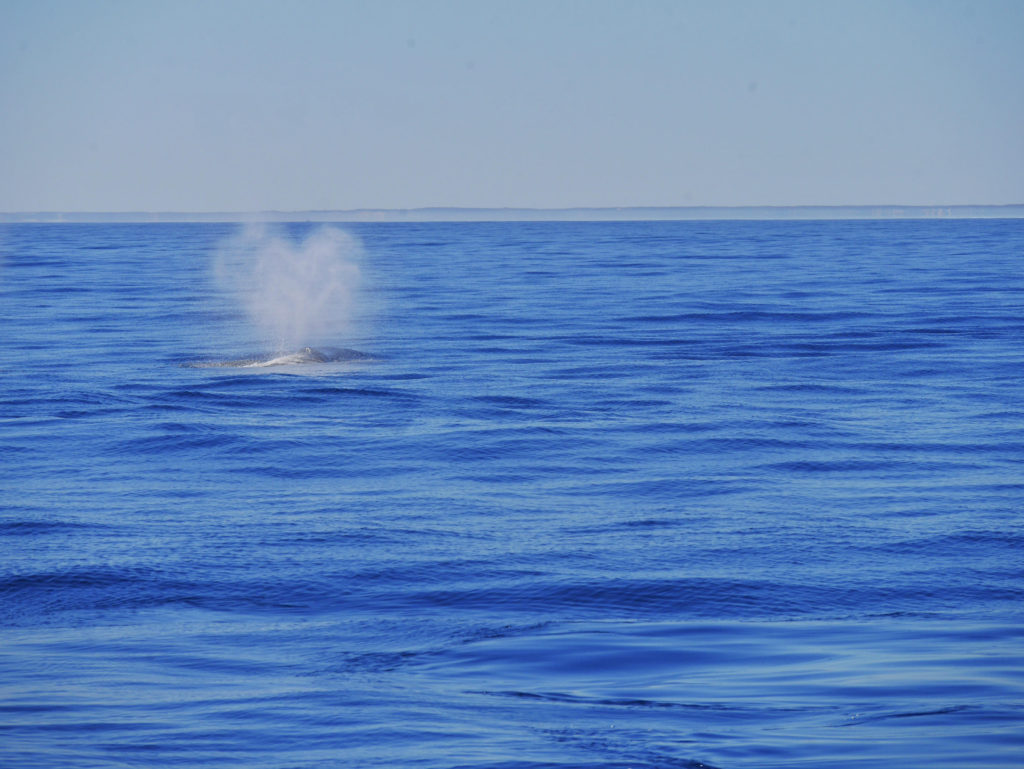 “First you were like woah! and then you were like WOAH! and the you were like woah! You got some serious thrill issues dude…” I felt a little like Crush from Finding Nemo as we encountered wildlife at every turn. One stretch of water was a (not so secret) hiding place for turtles and we saw little heads popping out of the water on every side of the boat.

Fighting for prime real estate ??… They may look like friends but these two turtles are not getting along. The turtle in the front is annoyed that the other is trying to steal his sleeping spot! ? . . On tour with @ningaloomarineinteractions

Vying for happiest animal in the ocean is the dolphin… and we had the chance to cruise alongside a few dolphins who were out for a lazy morning swim.

Ok, y’all. I’m fan-girling hard over here, but Alex Kydd is an incredible wildlife photographer, and he’s the Ningaloo Marine Interactions on-board photographer. After the tour, you’ll have an opportunity to purchase photos from the day. The embedded photos in this post are Alex’s from his Instagram… so if you like what you see, give him a follow!

Today I was incredibly fortunate to witness another shark feeding frenzy! 50 plus sharks circling and feeding on a bait ball. Here is one image to give you an idea of how it looked from below. Stay tuned for the feeding frenzy footage that I’ll be releasing soon. Thank you for another unforgettable day @ningaloomarineinteractions

The Ningaloo Reef is a UNESCO World Heritage listed site, and rightfully so. It’s the world’s largest fringing reef at 162 miles (260 kilometers). While the Great Barrier Reef is the world’s largest reef system, it’ll take you hours on the water to get there. (Hello seasickness!) A fringing reef means Ningaloo Reef is accessible with a quick boat ride or even from the shore. Plus, Coral Bay has a 3 hour flushing rate, which means water that enters the bay is gone in 3 hours, so there’s less pollution and good conditions for healthy coral.

I couldn’t write a post without filling you in on the food situation. Boat-life can be chilly, but a constant supply of tea and coffee is bound to help! And sugary treats for morning and afternoon tea are just what the doctor ordered. Plus, after swimming with the manta rays, nothing could be better than fueling up with hot cheeseburgers, grilled on board. 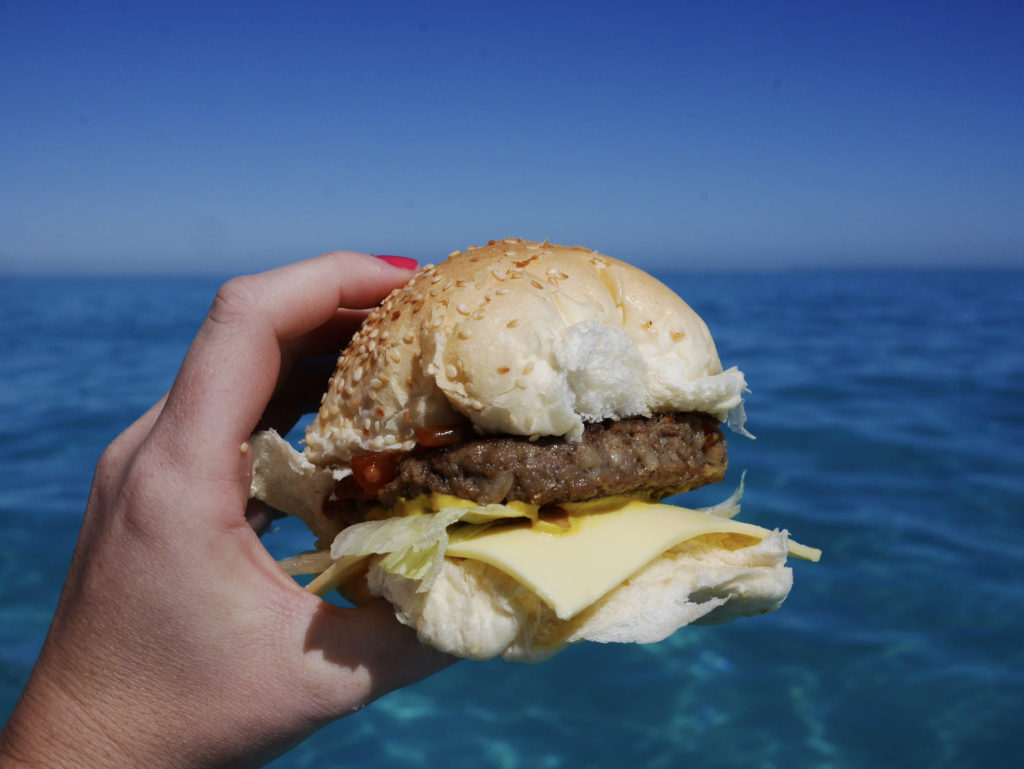 Just after I snapped this photo, I looked down to see a shark swimming next to the boat. Keep your eyes peeled throughout the day, because you never know what you’ll see!

Have you encountered a manta ray up close? Would you swim with a tiger shark? What part of Ningaloo Marine Interactions’ tour sounds best to you? 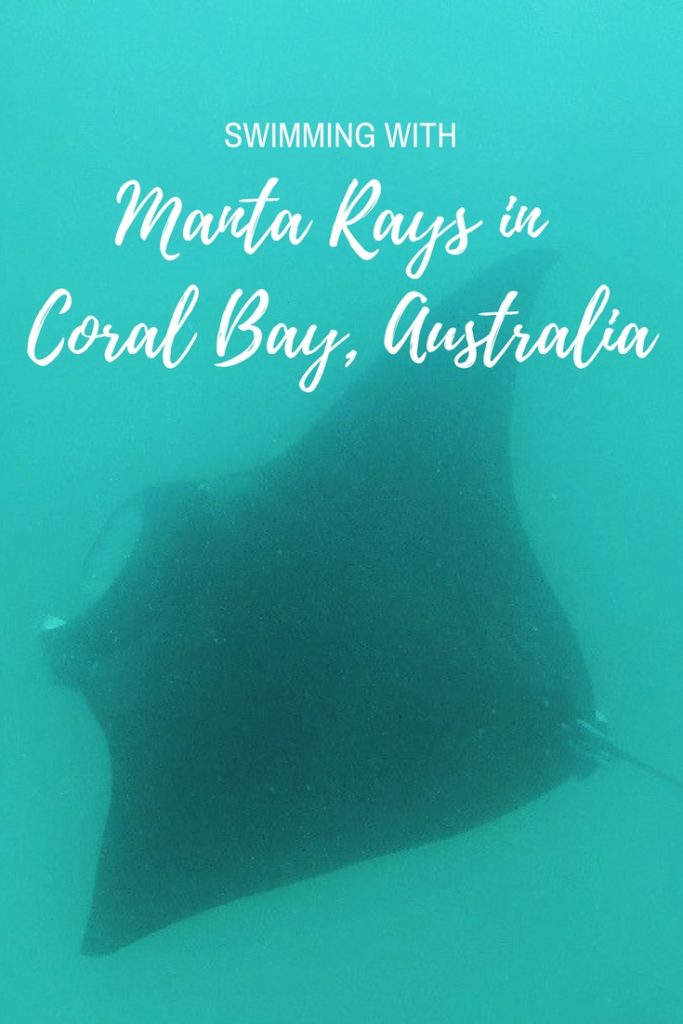 Disclaimer: The activities mentioned in this post were received free of charge. All opinions are my own, though, and I wouldn’t recommend anything to you that’s not awesome!